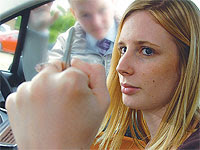 A man was being tailgated by a stressed out woman on a busy street.
Suddenly, just in front of him, the light turned yellow. He did the right
thing, stopping at the crosswalk, even though he could have beaten the red
light by accelerating through the intersection.

The tailgating woman was furious and repeatedly honked her horn,
screaming in frustration, as she missed her chance to get through
the intersection, while also, dropping her cell phone and makeup.

As she was still in mid-rant, she heard a tap on her window and looked up
into the face of a very stern looking police officer. The officer ordered
her to exit her car with her hands up.

He took her to the police station where she was searched, fingerprinted,
photographed and placed in a holding cell. After a couple of hours, a
policeman approached the cell and opened the door. She was escorted back
to the booking desk where the arresting officer was waiting with her
personal effects.
He said, 'I'm very sorry for this mistake. You see, I pulled up behind
your car while you were blowing your horn, flipping off the guy in front
of you and cussing a blue streak at him. 'I noticed the 'What Would Jesus
Do' window sticker, the 'Choose Life' license plate holder, the 'Follow Me
to Sunday-School' bumper sticker and the chrome-plated Christian fish
emblem on the trunk; naturally... I assumed you had stolen the car.'
Posted by Ben Witherington at 4:58 PM

For the longest time I wouldn't put any Christian bumper stickers on, for fear of having exactly that happening. A good reminder.

I laughed for a good minute straight when I first received this email a few weeks back.

Sad but true . . . hypocrisy plagues us all.

This story doesn't work on so many levels.

Most of the 'unchurched' people I know would actually have no difficulty in thinking a Christian would do this. Since "hypocrisy" and "do as I say, not as I do" are the Church's defining characteristics in their eyes, how could they do otherwise?

As for me, well, the church is full of sinners. Where else would you get the sin demographic that you get in Church? Pretty much everywhere in the general populace. Just because you have testimonies about changed lives, and even some changed lives :), that doesn't make the Church anything more than a place where you may glimpse the kingdom of God on occasions, again as with the general populace. What is the difference? Only a recognition of the grace given. Nothing else.

That is why the story truly doesn't work. It assumes the christlikeness of Christians in the here and now. Always a fatal error to my mind, one that inevitably leads to serious disillusionment, both inside and outside the Church.

Hope this isn't a true story! I find it a lot easier not to disclose my Christianity to anyone and that way I do not have to live a good life!! Of course I am only joking but it's not too far off the truth as to why I do not have bumper stickers! I want to be able to have a bit of road rage every now and again without fear of bringing Christ into disrepute...

The story is intended of course as a fictional reminder to Christians that the world is watching, and at least a good bit of the world knows what sort of behavior qualifies as unChristian. Of course it is true that the church is full of people who frequently don't live up to the standard, and some don't even realize their behavior is unChristian in a whole host of areas. I would just remind those who think this sort of behavior is inevitable even with Christians that the writers of the NT think otherwise--- consider for example Paul's words to those sinning Corinthians-- "No temptation has overcome you that is not common to humanity, and God is faithful, he will not allow you to be tempted past your power to endure." Either this is true, or it is not. If it is true, Christians have no excuse for behaving as badly as everyone else. God's grace is sufficient if we will draw on it, to do the right thing.

What a useful parable. Hypocrisy is however universal. Consider those who might have bumper stickers supporting saving the environment... whales... wildlife, etc., yet support or even work at an abortion mill. One thought... would an observant policeman or anyone else for that matter, see the problem with saving the environment and environment but taking the lives of children?

Yet all of Paul's arguments have never actually produced a church in which the story that you told would work. That is one of the most interesting things about the church - the aim is high, the achievement is - usually - low, and yet still this is the kingdom of heaven. Or at least a bit of it. :)

Please don't understand this as dismissive. I just find it worthy of comment.

This will find its way into a few sermons this Sunday :)
Marc

Sort of like when you put pro-life stickers on a car that has parts on it that are causing the devastation of the Amazon rainforest because they're made from that forest's trees, or like that "The Angel told Mary she was with God, not with fetus sticker" while you're wearing clothes made by people (and likely children) in appalling conditions in another country, or the "as a former fetus, I oppose abortion" sticker while eating chocolate, like Hershey's or Nestle or Cadbury, that was likely made from cacao beans harvested in West Africa by child slaves? I'm glad to see we finally came around to the abortion issue. I was a little worried there for a moment that we wouldn't. (I'm kidding)

And I've heard this story before and find it quite amusing. :)

I sent this to a number of friends and got this snopes reply that it is not accurate.
http://www.snopes.com/photos/medical/thehand.asp

I sent this to a number of friends and got a reply from one saying that Snopes at photos/medica1/thehand.asp shows it to be false

Hey, everyone knows that yellow means speed up! At least if you're from New Jersey or New York (like me)!