The Humanness of the Unborn 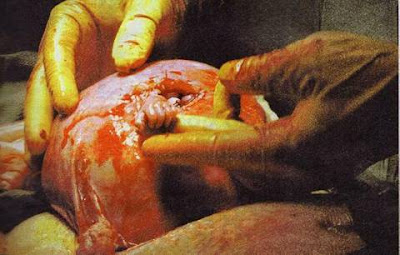 My mother sent me the following, which ultimately comes from a Nashville newspaper, and the hospital where various of my friends have had surgery, so I believe this story is reliable. I would suggest you read Psalm 139.13-14 and then read the following and view the picture above.

A picture began circulating in November. It should be 'The Picture of the Year,' or perhaps, 'Picture of the Decade.' It won't be. In fact,unless you obtained a copy of the US paper which published it, you probably would never have seen it.

The picture is that of a 21-week-old unborn baby named Samuel Alexander Armas, who is being operated on by surgeon named Joseph Bruner.

The baby was diagnosed with spina bifida and would not survive if removed from his mother's womb. Little Samuel's mother, Julie Armas, is an obstetrics nurse in Atlanta . She knew of Dr. Bruner's remarkable
surgical procedure. Practicing at Vanderbilt University Medical Center in Nashville , he performs these special operations while the baby is still in the womb.


During the procedure, the doctor removes the uterus via C-section and makes a small incision to operate on the baby. As Dr.Bruner completed the surgery on Samuel, the little guy reached his tiny, but fully developed hand through the incision and firmly grasped the surgeon's finger. DrBruner was reported as saying that when his finger was grasped, it was the most emotional moment of his life, and that for an instant during the procedure he was just frozen, totally immobile

The photograph captures this amazing event with perfect clarity. The editors titled the picture, 'Hand of Hope.' The text explaining the picture begins, 'The tiny hand of 21-week- old fetus Samuel Alexander Armas emerges from the mother's uterus to grasp the finger of Dr. Joseph Bruner as if thanking the doctor for the gift of life.'

Little Samuel's mother said they 'wept for days' when they saw the picture. She said, 'The photo reminds us pregnancy isn't about disability or an illness, it's about a little person.'Samuel was born in perfect health, the operation 100 percent successful.
Posted by Ben Witherington at 2:42 PM

snopes has an interesting bit on this: here

From what I am told that scene got recreated. It actually happened but no picture. So they put the baby's hand back on the doctor's and snapped a photo. Amazing. It is also amazing to me that some people call a baby either living/human or non-living/inhuman based on what side of the uterus it is on.

I am familiar with this picture and story, and it is tremendously moving every time I read it and see it.

My son is a little over a year and a half old, and it reminds me of him . . . of all the joy my wife and I had feeling him kicking through her tummy.

They also did an episode of House which used this story as a way to challenge the ever atheistic/agnostic Dr. House. It was a moving moment then, even when I knew it wasn't real.

The Snopes qualifier is important, since the baby was anesthetized and was not making a conscious motion or reaching out. The photographer misrepresented this fact.

I was raised Pro-Life and made that position my own, but until I read Michael J. Gorman on abortion--Abortion & the Early Church: Christian, Jewish & Pagan Attitudes in the Greco-Roman World, I had not realized what seems a very obvious fact in hindsight:

The Scriptural affirmation that Jesus was conceived by the Holy Spirit is not without significance (Matthew 1:20; Luke 1:35). For Jesus to become incarnate, to become truly human, entailed his participation in the full range of human experience--from conception through death. Jesus' humility in the Incarnation sanctified and dignified not only humanity as a whole but also the unborn child.

Jesus did not have to incarnate at conception. He could have appeared on earth as an adult -- as Marcion insisted -- or as a baby or a child. That He chose to do so at conception, and go through all the phases of human development is a further indication of the value God places on the unborn.

Hi Maureen:
No, Snopes admits the picture and the surgery were genuine. It happened ten years ago. What is fake is the supposed comment of the doctor, or the idea that the unborn was deliberately acting in a human way. The unborn was anesthetized like the mother. We are simply talking about a reflex action. Check the link smijer provides.

I'm not disputing the snopes entry exactly, but it's been shown that snopes is not exactly politically neutral. Where ever a left-leaning sensibility might be involved, take snopes with a grain of salt.

Of course the photographer is properly criticized for his mischaracterization of the picture. Notwithstanding his lack of ethics, this photograph disturbs because it upsets the applecart of a convenience culture that pretends abortion does not constitute legalized "violence against children." A generation ago "life unworthy of life" typified a mentality that permitted and even enabled an inexcusable devaluation of life. The resulting holocaust engulfed the entire world. In a world where "seeing is believing," more such pictures are needed.

From Michael Clancy's (the photographer) website: "The tension could be felt in the operating room as the surgery began. A typical C-section incision was made to access the uterus, which was then lifted out and laid at the junction of the mother's thighs. The entire procedure would take place within the uterus, and no part of the child was to breach the surgical opening. During the procedure, the position of the fetus was adjusted by gently manipulating the outside of the uterus. The entire surgical procedure on the child was completed in 1 hour and thirteen minutes. When it was over, the surgical team breathed a sigh of relief, as did I.

As a doctor asked me what speed of film I was using, out of the corner of my eye I saw the uterus shake, but no one's hands were near it. It was shaking from within. Suddenly, an entire arm thrust out of the opening, then pulled back until just a little hand was showing. The doctor reached over and lifted the hand, which reacted and squeezed the doctor's finger. As if testing for strength, the doctor shook the tiny fist. Samuel held firm. I took the picture! Wow! It happened so fast that the nurse standing next to me asked, "What happened?" "The child reached out," I said. "Oh. They do that all the time," she responded.

'For he will command his angels concerning you to guard you in all your ways. On their hands they will bear you up'. Psalm 91
Amazing story!

A few thoughts. Let me preface them by stating that I do believe abortion is the murder of infants - the taking of life and a tragic thing in our culture. I also think there is evidence in Scriptures about this - particularly Exodus 21:22-25. I also think this photo is a very powerful picture (and there is an abundance of other evidence about life in the womb - especially as science progresses).

That said, 1) I don't think there is any defense of articles that do have multiple inaccuracies in them; all these kinds of things do is give more fuel to skeptics than to help. Our integrity with information should be of the highest degree - and above reproach. Being "loose" with such stories does not meet that very Biblical standard.

2) I'm not big on using Ps. 139:13-14. When you read the entire context, the point is not to promote life in the womb (even those words in that passage cannot be fully construed as David arguing he was alive then). The Psalm even indicates he was on God's mind before he was born. A stronger text would be Ex. 21, imo.

But, even those texts really aren't necessary. Scientifically, a very strong argument can be made that an infant is alive (if it weren't for a strong political movement of abortion rights activists, no medical expert would disagree). If life is established, then it's simply a matter of "human rights" of which life is at the very root. And countless passages prohibit the taking of life.

I always rely on snopes when this stuff gets circulated around the internet. Seemingly, its a false description of what happened but what amazes me the most is the fact that the doctor said that the baby "was not aware" of what was happening because he was under anesthetic, thus implying that, had the child not been under the drug, it would have been fully aware and somehow that would have been unacceptable.

I hope now they'll start anesthetizing babies before they abort them at 21 weeks.