BISHOPS CALLS FOR HI TECH FAST FROM CHIPS AND BYTES 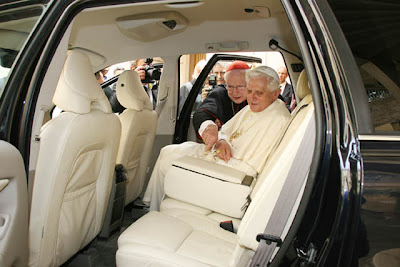 In a move bound to cause controversy with the young, Italian Catholic bishops have called for a high-tech fast during Lent, calling the faithful to abstain from Ipods, MP3 players, surfing the Net, and yes, gulp, fast Italian cars. The Diocese of Modena has in addition called for a ban on text messaging every Friday (but how will your friends know where to meet you for your fish dinner). The Modena diocese released a brief statement saying that the point of all this is "its a small way to remember the importance of concrete rather than virtual relationships". I guess the point is moot if you have no relationships with concrete :)

The Turin diocese has called for the faithful to fast from TV during Lent, and in Trento the diocese has called for the faithful to ride a bike, take the bus, and turn off the Ipods, enjoying the silence. And you may ask--- where can you find these appeals to abstain from the Net and Ipods and the like. Well, I am glad you asked--- on the Diocesan websites of course! Meanwhile in January the Vatican launched its own YouTube channel with Pope Benedict welcoming everyone to this "great family without borders". Benedict XVI in fact praised social networking sites like Facebook and MySpace in helping people forge friendships.

After these mixed messages, the faihtful including some clergy have reacted cautiously to these Lenten requests. Stay tuned for the Easter message which will urge the faithful to rise up and text everyone you know that "Christos aneste!"
Posted by Ben Witherington at 5:19 AM

Perhaps too many in the congregation were texting friends rather than listening to the homily/sermon?