THE NEW TESTAMENT IN ANTIQUITY-- A TEXTBOOK 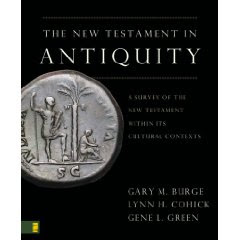 ‘Of the making of Introductions to the New Testament, there is no end, and much reading is a weariness of the flesh’ but not all Introductions are created equal. This particular Introduction seeks to thoroughly place the New Testament within its Jewish and Greco-Roman cultural contexts, and this, it must be said, is a big improvement over most Evangelical Introductory texts, especially those of an earlier era. Thus, the authors are to be commended for putting a lot of work into this resource, which is visually alluring, quite readable and could be used either at the college or introductory seminary level. The authors, Gary Burge, Lynn Cohick, and Gene Green, all teach at Wheaton College in the Department of Biblical and Theological Studies.

All such Introductions have their pluses and minuses and this volume is no exception. Let us first mention the pluses: 1) the volume is well written and readable, avoiding a lot of technical terms and scholarly jargon; 2) the authors stick to areas with which they are most familiar and on which they have done research and writing. This brings some strengths to this volume that a single authored volume could not have, as no single person is an expert in all the New Testament; 3) the numerous pictures, maps, charts, and excursi are helpful, as are the two tiered bibliographies; 4) the quality of the production of this volume is high, with excellent binding and durable pages. This book is intended to be a reference volume and textbook for the long haul. 5) the book is of a manageable size (less than 500 pages of text), making it serviceable for a one semester course.
Now for some problems with this volume. Without question, most scholars, including many Evangelical scholars, will see this volume as reflecting either a pre-critical or overly conservative approach to the New Testament data when it comes to issues of authorship, date, audience, sources and the like. For example, the traditional view on the authorship of all the NT books is generally advocated (even when documents, such as the Gospels, are formally anonymous), though objections to these views are noted, and efforts are made to mitigate their force. Or again, the approach to the Synoptic Problem does not grasp the nettle and really wrestle with why 95% of Mark’s Gospel reappears in Matthew’s Gospels with over 50% exact verbal correspondence. As I tell my students, if I get two term papers and one of them contains 95% of the other one with over a 50% verbatim rate, I’m going to know there is some sort of literary relationship between these documents. In other words, this is a book for Evangelical Christian colleges, and will be less serviceable in other contexts where a better representation of the spectrum of opinion on such issues will be desired. Perhaps if one sees this as an Introductory text for Evangelical college students only some of this is understandable.

Secondly, there is a difference between looking at cultural data as ‘background’ material, and recognizing that one needs to wrestle with the interface between the context and the content of the New Testament. The text of the NT is an artifact, just as much as any other ancient archaeological object and it reflects the culture and conventions of its age. It is not just that the context illuminates the text, it is that the text emerges from, addresses, and reflects that context in its style, its rhetoric, its social conventions, and in a myriad of other ways. Helping the student come to grips with the need to learn about all of these ancient contexts, literary, social, rhetorical, philosophical, religious, theological is crucial. Here, a few more introductory and orienting essays would not have gone amiss to help with the integration. As it is, most of the integration is left to the students themselves.

Thirdly, I appreciate very much the fact that this text does indeed at least begin to expose the reader to the importance of Greco-Roman rhetoric for interpreting the New Testament, but unfortunately it doesn’t much treat the diverse use of rhetoric in the New Testament. Furthermore, the usual mistake is made on p. 104 in reading 1 Cor. 2.4 and 2 Cor. 10.10 as if Paul is disavowing the use of rhetoric or rhetorical skill, with the conclusion “Paul did not come to the city (in this case Corinth) as a rhetor to the city, but as a herald who proclaimed the message of Christ….” This is simply a misreading of the evidence, which fails to take into account that what Paul is disavowing is sophistic rhetoric, the rhetoric of the super-apostles, not the use of rhetoric in general (see the work of Bruce Winter on this point). The issue in 2 Cor.10.10 is not whether Paul used rhetoric or not, but his having an ethos problem--- there was some kind of physical impediment that caused Paul’s presentation in person in Corinth to be less persuasive and powerful than his letters. Galatians suggests he had an eye problem, not a surprise after the description of what happened to him on Damascus road. I could also have wished for more of the sort of primary source social data one finds in Craig Keener’s excellent Bible Background Commentary, but then one Introduction cannot be all things to all people, and it is a considerable achievement to be able to deal with both contextual material and the usual Prolegomena issues in the same textbook.

Despite some deficiencies and missteps this Introduction should become the Introduction of choice in Evangelical college circles. It has a wonderful visual component lacking in Keener’s volume, and while it is not as thorough as David de Silva’s fine Intro on Prolegomena issues, the visual component, in an age of visual learners, is now essential to reaching students and getting them into the text. The computer generation of students requires such stimuli.

These three fine scholars are to be commended for their hard work on this volume. I wish it a long and useful life reminding students that a Biblical text without a context is just a pretext for whatever one wants it to mean.
Posted by Ben Witherington at 8:29 PM

Thanks for the wonderfully balanced review.

I also appreciate the nuance you bring in describing what Paul was trying to say in relation to rhetoric in 1 Cor 2:4. However, even though Paul doesn't disavow using rhetorical structures and persuasion per se, isn't he trying to clearly draw a contrast between depending on human wisdom/persuasion and the power of the Holy Spirit? (as opposed to sophistic rhetoric)

I could have all the rhetorical power/techniques in the world in proclaiming the Gospel, but it will fail to convince and convict absent the Holy Spirit (1 Cor 2:13).

No the contrast there is between Spirit inspired rhetoric, and sophistic rhetoric that is mere human artifice.

Ben,
Which Keener volume are you referring to?

As I mentioned in the post, I am referring to Craig Keener's IVP Bible Background Commentary.

Would you go into more detail about Paul's physical impediment? In what way would an eyesight problem have made him less imposing to the Corinthians?

"Biblical text without a context is just a pretext for whatever one wants it to mean."

Without the socio-rhetorical tools you are talking about, how can anyone really understand the Bible. I know this is an obvious question with a ready answer. Just don't know what that answer might be.

Ben good stuff. I hesitated when you started dealing with the duplicated stuff in both Mark and Matthew, I was afraid you were going to say 'plagiarism', but lo and behold, the true wisdom of a scholar popped out when you said 'literary relationship' though i seriously doubt you use this term when your students turn in duplicate papers! God bless, john

All of us, and I do mean all of us, stand of the shoulders of those who have come before us, when it comes to understanding and teaching God's Word. The simple answer to your question is just equip yourself with the best resources you can-- good commentaries by good scholars.

First of all you need to understand that the ancients were as image conscious as we are. Just look at their statues which are idealizations, rarely accurate representations. Read, first of all Gal. 4.13-15 carefully. The eyes were viewed as the windows of the soul, and the ancients believed that if you had leaking, or problematic eyes at a minimum you had a problematic soul, and at a maximum they were fearful that you might curse them by casting the evil eye on them. Paul had some kind of chronic condition which affected his eyes, and the Galatians actually didn't do the natural or instinct thing of rejecting Paul for it, rather "you would have plucked out your eyes and given them to me", which is more than just a flowery metaphor.

Rhetoricians dressed and quaffed themselves to impress. If their toupee flew off during a stirring speech in the agora, they were having a bad ethos day. If their eyes were problematic, they were having a bad ethos day. Now Paul knew very well that he had this condition, and that it made him appear weak,and to some despicable. This is why he tells us the Corinthians contrasted his powerful letters with his in person delivery (see 2 Cor. 10.7-10, and notice how he accused them of judging by appearances).

Would you say that Burge/Cohick/Green and deSilva would be a good combo if one were wanting to have just a couple of really good NT intro volumes at hand?

Yes I would say they make a good combo.

The only Biblical Scholar I really know is Bruce Metzger (as well as your stuff that's been taught in the campus ministry I go to). I've got the last edition of his intro to the NT.

Really, it's the only one I've ever read. How does this one compare?

The Metzger one is fine, but very dated. It does not have the social data you find in Burge et al.