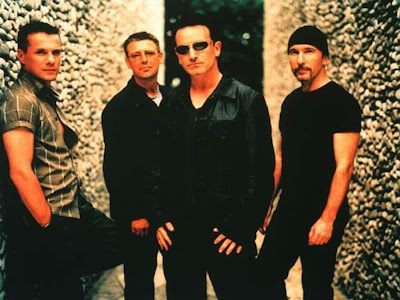 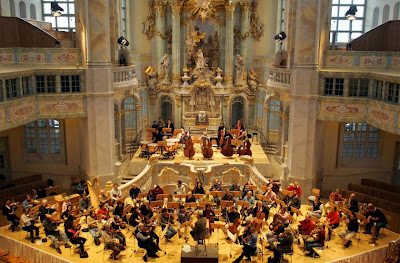 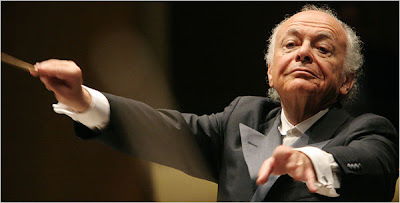 So I get back from Houston, and don't even change clothes, 'cause me and the Missus are heading to Danville Kentucky (not to be confused with Danville, Va.) to see The New York Philharmonic at Centre College. This is probably the only time since the time of Dan'l Boone, which is to say, the only time, they have ever played in the Bluegrass of central Kentucky. And they were MAGNIFICENT (to borrow a title to a new U2 song)! They played standard classics-- Berlioz's Roman Carnival, Schumann's moving 4th Symphony, and the piece d'resistance--- Mussorsky's fabulous Pictures at an Exhibition (which contrary to popular belief was not written and first performed by Emerson, Lake, and Palmer). Then there were two encores... and the Norton Center was rockin'--- all standing ovations. The sound was crystal clear, and we sat 15 feet from the stage....... WOW. Everytime I hear a symphony like this it reminds me that we need to reflect a lot more on the relationship of the following things--- beauty, truth, passion, love. There have been those who have said beauty is truth-- unfortunately we know this is not true. We've all seen visually beautiful things and persons that were far from true. But on the other hand truth is not always pretty either (e.g. the cross). But most of all a symphony reminds me of the incredible harmony amidst diversity we find not only in the universe but also in the New Testament. More on this, in the first volume of my The Indelible Image.

And just when I thought it couldn't get any better, then I turn on GMA this morning, and there are the 4 last men standing from the original rock revolution--- U2 playing live on the quad at Fordham, while some nervous Catholic Fathers were looking on. And they also, in their own way were Magnificent, though in terms of musical ability and complexity they couldn't hold a candle to the NYP. In a sense, I realized I was watching the end of an era in both cases. Loren Mazael (see above)is retiring as director and conductor of the NYP, and is on his victory lap tour now. Whilst we don't know how long U2 will go on, it is clear that the future of rock n' roll is very much in doubt if we are talking about rock n' roll having mass appeal. So this morning at Fordham we had mass appeal, after which the Fathers had a Mass Appeal. Fitting.

I'm hoping for a day kind of like this last one when Jesus decides its time for me to check out..... sing and play me into the pearly gates. Of course, for my sins St. Peter may put me in the Polka time out part of heaven for a while when I get there instead of letting me straight into the heavenly choir. :)

Oh yes, and one more thing I forgot to mention-- God as it turns out is a musician. Here is a little passage from my forthcoming book on Work....

"Perhaps a word is in order first about God as an artist. Of course we can see this just by looking at the stunning beauty of creation, but as it turns out God is not just a ‘visual’ artist,

God is both an inspirer of, but also a composer, of music, as Robert Banks points out.

So for instance God tells the Israelite leaders in Deut. 31.19 “write down this song and teach it to the Israelites, and have them sing it.” In fact there is a direct connection made between God giving verbal wisdom to someone and God inspiring song in 1 Kngs. 4. 32—“God gave Solomon wisdom…he spoke 3,000 proverbs and his songs numbered 1,005.” The precise number of the latter suggests someone took a specific count of the number of times the King was inspired and given lyrics this way.

God however is not just heavenly source of inspiration. God is a blues singer. Thus in Jeremiah we hear ‘Therefore I wail over Moab…my heart laments for Moab like a flute…” (Jerm. 48.31-36), but he also sings joyful anthems and ballads “The Lord your God is with you…he will quiet you with his love, he will rejoice over you with singing.’ (Zephan.3.14,17). God doesn’t just sing morning music however, he also sings night music—“By the day the Lord directs his love, and at night his song is with me…” (Ps. 42.8). No wonder the natural response to God, is music of all sorts, for God is not merely the inspirer of all sorts of music, God embodies and shares all sorts of music.

Robert Banks puts it this way:

"Just as love is not only directed to or expressed by God, since God, as the apostle John says, is love, so is God not only the one who inspires and enjoys music, but also is music and song. This makes God the supreme exemplar, as well as the supreme author and audience, of music. This makes God music’s chief patron, which is why making music ‘to the glory of God’ is so fitting. It is only giving back to what God has given in the first place. It is only recognizing that the musical dimension of life, like the orderly character of the universe, ultimately stems from the musical character of God. In the end we make music not simply because God gives us the capacity to do so or appreciates our making it, but because God is inherently musical."

WORD TO THE TONE DEAF: ARE YOU TUNING UP FOR ETERNITY?
Posted by Ben Witherington at 6:10 AM

Music is such an important way into God and the way he thinks. I've often compared the Bible to the orchestral score of a symphony: different parts, often dissonant, but always resolving into rich and deep harmony.

I'm also convinced that the conductor of the heavenly choir will be Herr J S Bach. I know - it's been said that when the choir sing for God they sing Bach, and when they sing for themselves they sing Mozart (and God eavesdrops).

But have you ever heard Leopold Stokowski's orchestrations of Bach? Now they have the flavour of glory about them - fantastic!

Hi Ben
One of my hobbies is singing in a barbershop quartet (a style of music which many musicians have great boas about - thanks for hammering polka instead of barbershop!). I am doing a presentation on the inner, spiritual dimensions of music at a barbershop educational conference, and if in your research you have found some good resources along those lines, I would appreciate the info. Thanks for your post!
Shane