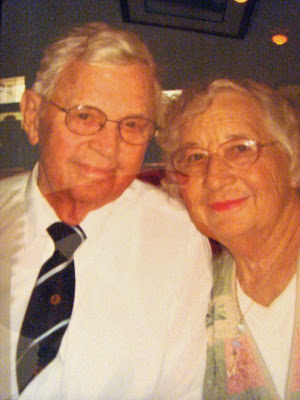 MY MOM AND DAD IN THEIR GOLDEN YEARS 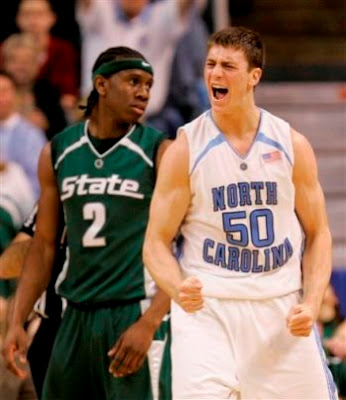 I was walking down Franklin Street in Chapel Hill last fall where I was there to do a church and Intervarsity event, and literally ran into Tyler Hansbrough. I took a moment to shake his hand and thank him for coming back to school, and doing things the right way, the real Carolina way. Carolina is the only Division One school I know of that has a 92% graduation rate of its basketball players. They not only get to play great basketball, they get a good education as well which serves them well in life. In addition, the program is squeeky clean--- we have never been on probation for anything. But UNC has always been a remarkable place. It is the oldest State University in the country to open its doors (1790s), with one of its first students, Hinton James walking all the way from Wilmington just to get an education. I was never more proud of my University than last year when they announced the Carolina covenant--- a program which allows anyone who has the grades to come to Carolina, and if their family is too poor to pay the way, the covenant fund will completely cover the cost of their education. Now that's really no child left behind.

My father was a Carolina cheerleader and track man, and one of the most enduring things I will always remember about my Dad, who passed away last November, is about the last thing he asked me before he went to be with the Lord was---"Who won?" He was almost as passionate about his basketball team, as about his family and his faith--- almost. We spent hours together listening to the Tar Heel sports network (in the last 30 plus years that meant Woody Durham, and we loved his colorful commentary. When the Tar Heels would go on a run, he'd say--- "Go to war Miss Agnes!!"). I vaguely remember listening on the radio to Carolina's 1957 undefeated championship run with Dad. We not only beat Michigan State in 3 overtimes in the semi-finals in Kansas. We then turned around and beat Kansas on their own turf, and they had Wilt Chamberlain!!! This also was a three overtime game as well. People can talk all they want about the best Final Four ever, but in terms of drama, nothing could have beaten those two games. Our coach had a 6'5" guy jump center against Chamberlain to psyche him out! You could tell it would be interesting from the outset, with many a mind game played. Dad and I even turned off the TV commentating which was often banal to listen to good ole Woody while watching the game together. That's the sign of a real Tar Heel fan, you know.

Five national championships later, all of which I lost years off my life cheering and screaming at(1957,1982, 1993, 2005, and now 2009), I now think there is full warrant for the bumper sticker that still graces my old guitar case--- "If God is not a Tar Heel, why is the sky Carolina Blue?" In an age of rampant cheating, dirty play, and politics,and the recruiting of thugs who are not interested in a college education, Carolina still wins the old fashioned way-- honestly by hard work and good play with student-athletes. Tyler Hansbrough, by no means the most talented Tar Heel ever (that would be Michael Jordan) epitomizes this. I was so proud of him last night. His year began with injury, but it ended in triumph. And what a victory it was.

I have never seen Carolina play a more dominating half of basketball against a good tenacious well-coached team than last night's first half. They were on a mission to prove the nay-sayers (like Duke grad and Carolina hater Seth Davis of CBS)all wrong. They not only shut up their critics. They shut up the largest partisan crowd ever to see a basketball game in human history. One estimate said there were 60,000 Spartan fans there in the Detroit arena out of 72,000. I doubt it was that many, but it was a huge majority. As Tom Izzo himself said, the better team definitely won.

Somewhere up there in heaven, my father is eating some good ole N.C. barbecue, drinking some sweet tea and singing "Roll em down you Tar Heel warriors" complete with cheerleading motions. This one's for you Dad--- I wish we could have watched and listened to it together.

BW3
Posted by Ben Witherington at 6:32 AM

As a Spartan fan I have to agree with you, the better team won. Your recollection of you and your dad watching games together remind me of me and my grandfather watching baseball together in front of the old black and white Zenith back in the seventies. Everything I know about baseball is because of him. I too would watch the game on TV but turn down the volume and put the radio on to hear their play by play. Thanks for bringing those memories back!

Most of the TV guys on CBS were predicting a Michigan State win. I guess they have offal on their faces now.

I'm glad that Tar Heel nation has a title for your dad.

Have you read The Almost True Story of Ryan Fisher? One of the best novels I've read in the past year. Great stuff!

I agree with Zibah - nothing could be finer than to be a Witherington AND a Tarheel. How I wish I could have seen your dad cheer!

Ben Ben Ben, I have to admit to being somewhat disappointed. You're place of business is right in the backyard of another program that (like UNC) is quite arguably the top college basketball program in the nation, namely the University of Kentucky Wildcats.

Of course, we're down right now but things will quickly change. The era of Calipari will begin this Fall. We still have some room on the bandwagon. I encourage you not to miss out!

Ben, I see your wonderful mother often at church and I told her about this blog since she has trouble with her pc. I am going to copy it for her to read and I know it will make her happy to see some of your wonderful work.

I knew I liked you for some reason. Been following the Tar Heels since 1979 (I was 9). Sometimes I think I am too passionate about it. Really enjoyed seeing them play to their potential. Also have to say that I miss good ole eastern NC barbecue here in Maryland.