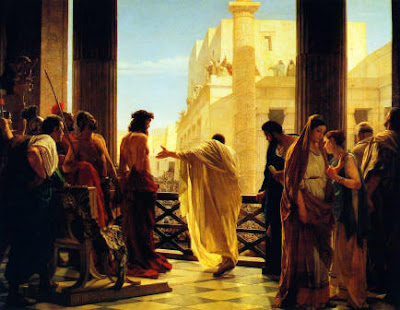 A Companion Along the Way: Easter Sunday on the Emmaus Road
by Dr. Ralph F. Wilson

The gleaming cloud tops and fragrant spring air would have
invigorated most travelers leaving Jerusalem that Sunday
afternoon. But these two began their trek to Emmaus staring grimly
at the trail, forcing leaden feet up the steep path to the ridge,
where they would follow the road down the Judean slopes.

Cleopas and his friend were going over and over the events of the
weekend that had climaxed with their Leader hanging limp, pale,
lifeless on a stained wooden cross. Then a hurried burial -- and
despair.

Hearing the crunch of footsteps behind them, Cleopas glanced back.
A traveler was rapidly climbing the grade, as if to join them. But
he had caught only fragments of their conversation. "What are you
talking about?" he asked, as he caught up to them.

Cleopas stopped. "Where have you been?" he asked. "Everybody in
Jerusalem has been talking about Jesus of Nazareth." He told of
their excitement. Of the arrest and crucifixion. Of the women's
tale of a stolen body and of angels. "We had hoped that he was the
Messiah," Cleopas said, "but now...." His words drifted off in
sadness as he resumed the journey.

They were at the summit, and as the road began its downward
incline, the traveler shot a strange challenge: "Don't you know
what the Scriptures say?" Cleopas just shrugged and gestured with
his hands as if to say, "We don't know."

So for the next several miles, the traveler began to talk,
patiently explaining each of the Scripture passages that spoke
about how the Christ, the Messiah, would have to suffer. Then he
explained about Messiah's glory to come.

Cleopas and his friend walked with amazement. It was as if
Scriptures that they had heard, but never understood before, began
to click into place. Their steps quickened. Their hearts were
pounding, but they didn't notice.

The miles seemed to melt away. Then suddenly, just around the bend
was their village, Emmaus. They were home. The traveler thanked
them for their company and turned again to the path, but they
didn't want to let him go. Not someone who could bring them such
hope, such understanding from the Scriptures.

"Won't you stay overnight?" Cleopas called. "It'll be dark soon.
You must! Please!"

He did stay. As they reclined around the table, Cleopas handed a
fresh round loaf to the traveler. "Would you honor us by offering
the blessing tonight?"

The traveler lifted up the bread and repeated the familiar the
Jewish blessing:

"Blessed are you, O God, King of the Universe,
Who brings forth bread from the earth."

And then he began break it, handing a piece to each of them in
turn. Cleopas caught his breath. His eyes met the man's. Suddenly,
in that moment, he knew! Who knows how? -- but he knew. It was the
Lord! He saw the faintest glimmer of a smile on his face, and then
Jesus simply vanished.

All they could do was stare at each other for a moment in stunned
amazement.

Then Cleopas jumped up. "It's true! The women were right. Jesus
is alive! He has risen!"

Their food and drink lay untouched on the table, but both men were
bounding out the door and away, running. "No wonder our hearts
burned within us while he was talking to us on the road," his
companion said later, as they paused briefly. They ended up
running, then walking, then running again nearly the whole way
back to the city.

Cleopas pounded on the upper room door. "We have seen him! We have
seen Jesus!" Peter opened the door a crack, but Cleopas couldn't
contain himself and pushed his way in. Then their story tumbled
out. "He's alive!" Cleopas concluded. "The moment he broke bread
with us, all of a sudden, we knew him."

Like these two men on their way to Emmaus, many have come to the
same startling conclusion. Unrecognized, Jesus begins to walk the
road with us, to talk to us. And if we think to, if we care enough
to ask Him in, we come to realize who He really is -- the Christ,
the Son of God, the Risen One.

I've come to define wisdom in my life as how soon I recognize the stranger who comes alongside. He is a perpetual traveler, overtaking all of us who believe, even when we think ourselves to be walking in solitude. He offers wisdom, recalls Scripture to the mind, restores our courage. But he does enjoy traveling incognito. We're fortunate to realize, some way farther along, who "came alongside" us to lighten our step.

May all our hearts burn and our minds be enlightened as we open to Him who stands at the door and knocks.

I cannot for the life of me fathom why protestant communion liturgies all, at least in my experience, do not repeat our Lord's prayer over the bread and the wine. We know the exact words He spoke in the prayers.

A beautiful piece. Thanks