FRACTURED FAIRY TALES FROM THE FARM NO. 3

Ours is an age of hybrids. Hybrid cars, hybrid economies, hybrid vitamins and foods in general. It is thus not unexpected that there might be hybrid holiday food, in this case for Thanksgiving. Enter the turducken, one part turkey, one part duck, and apparently some chicken as well. Scientists have had theories about the origins of these rare birds, even though no one seems to have seen them in the wild. Here below is one scientific hypothesis on the matter. 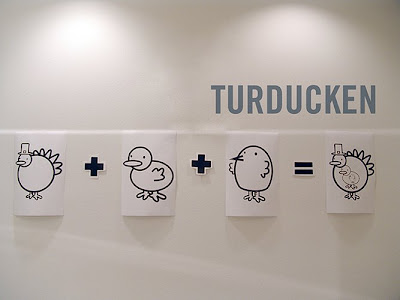 Even cartoonists have gotten into the act speculating about how this hybrid creature originated and propagated. 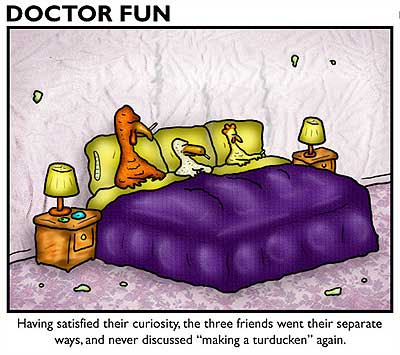 Still, no one has been able to catch one glimpse much less of a photo of this animal in the wild, but we have some theories. For one thing talk about this bird only comes up in the fall--- during football season (although now a days ESPN seems to think every season is football season, even broadcasting spring practice games, so desperate are they to satiate the hunger of football fans). For another thing, the most famous football announcer who has regularly talked about this bird is a man who refuses to fly, riding around the nation in a tricked-out RV of considerable girth. I am referring to John Madden. 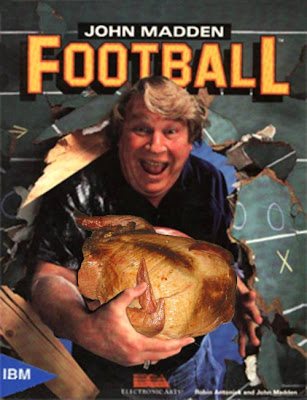 Madden has just suddenly retired, and I think I know why. His secret about the turducken was about to be exposed, because you see, that RV is in fact a rolling scientific lab, where experimentation has long gone on, on innocent animals, producing the turducken! Madden would ride along between games gathering up ducks, chickens, and turkeys in the fall, and putting them through his animal synthesizer. Though we never saw the process, we certainly saw the product and proof these shenanegins had been going on. Here is a shot of a cross-section of a turducken.

You can see perfectly well how the dark and light meet have been sectioned together in zones, an amazing feat of alchemy, and making it almost impossible for the picky person to be able to avoid eating both dark and light meet. Whilst there are some theories that the turducken originated in the kitchens of Cajun chef Paul Prudhomme, I assure you it is not so. Madden, the mad scientist, is at the bottom of this. If you wonder where he got his favorite expression "then BOOM, the quarterback got sacked....", the boom of course comes from him regularly experiencing explosions in the back of his RV whilst combining animals, using a modified farm combine.

I have little hope now that Madden will ever be caught and charged, especially in the wake of his sudden retirement. In fact, he is now making enough dough (figuratively speaking) from his Madden NFL game to be able to retire. And I have heard rumors as well that he has cut a deal with the NFL commish as well. You thought all those footballs were really made of pigskin? Certainly not! The skin of a football is much too dark to have come from a pig. No, in fact over the last ten years it has been the hides of turduckens that have been used! This may explain why so many field goals have gone wide right, because when a turducken tries to fly with the will of a chicken, the mind of a duck, and the wings of a turkey, it flies in wobbly fashion for sure. But there is more. Look closely at the laces on the football. Notice they are no longer made of cloth or string, but rather of some kind of hide or leather. I'm think it is the turkey gobblet that hangs down that has been made the sacrificial source. Enough for now, next episode we must investigate that most famous of all sly creatures--- vermin, or as it is known in the South, the Varmint.

Question d'Jour from Bubba in Chittlin' Switch N.C. Does the turducken produces as much tryptophan, that sleep-inducing drug, as the turkey does? Answer: No, far less which is why Madden was trying to substitute it for the turkey at Thanskgiving, to improve the football ratings on the Thursday afternoon NFL games on Turkey Day. What would the Pilgrims say!!!
Posted by Ben Witherington at 4:55 AM

I know that Madden is absolutely petrified of flying and he won't get on a plane.

His football game is still the most realistic sim of the football video games. I also appreciated his analysis of the teams and the games