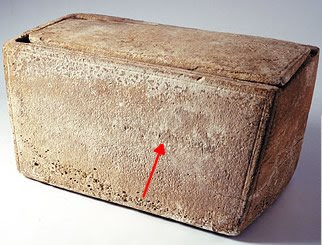 In the 'its about time department' the following is from the Biblical Archaeology Society website today. I'm thinking its about time to print up the bumper stickers saying "Free the Ossuary".


*Special Report* James Ossuary Trial Continues to Unravel
April 01, 2009
A recent development in the James Ossuary trial taking place in Jerusalem has highlighted the weakness of the prosecution’s case, reports the Jerusalem Post. One of the two defendants in the case, Robert Deutch, took the stand this week for the first time since the trial began three years ago, stating that the accusations against him were “lies and hallucinations.”

Deutch and his co-defendant, antiquities collector Oded Golan, were both indicted in December 2004 for allegedly forging ancient artifacts and then publishing scholarly papers on them in order to enhance their value before selling them to collectors.

Deutch, who is an antiquities dealer and one of the world’s leading experts on Semitic inscriptions, pointed out that the prosecution failed to produce a single e-mail between him and his alleged co-conspirator Golan, and that the entire case was a “witch hunt” conducted by the Israel Antiquities Authority for the purpose of shutting down the licensed antiquities trade in Israel.

During the course of his testimony, Deutch produced evidence that refuted several of the prosecution’s charges against him, as well as evidence that the artifacts in question are indeed genuine.

The case against Deutch and Golan has been steadily unraveling since last October, when the presiding judge advised the prosecution to consider dropping the case, pointing out that they have thus far failed to prove that the artifacts in question are fakes.

Matthew Kalman reports on the latest development in the forgery trial for the Jerusalem Post.
Posted by Ben Witherington at 2:36 PM

I'm curious of a couple of things.

1) What is your take on the authenticity of the Ossuary?

2) If this ossuary is indeed authentic, what are some of the implications for Christians and apologetics? Will the shadow of doubt that has been cast on it be a problem?

Hi Leslie: If you will just do a search on this blog you will see I have answered that question a bunch of times. Yes, I think it is probably authentic.