All That Jazz--- in Daytona Beach 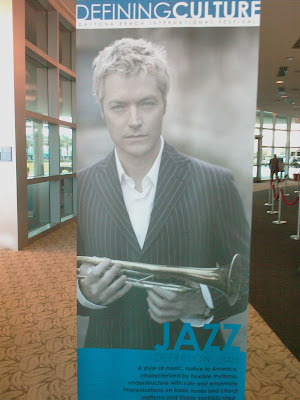 My sister Laura and I are musicophiles. To say we are music lovers is to say too little its closer to music-aholics ('Hi my name is Ben, and its been 21 days since I bought my last CD'). We were raised on the piano bench (our mother is a pianist and piano teacher) and so we were always going to concerts-- mostly classical, until I finally convinced my mother that Herb Albert and the Tijuana Brass were not leading us all down the prime rose path to musical destruction. Of course, I wasn't going to take her to a Rolling Stones concert :)

But I digress. Over the years, my sister and I have gone to many concerts, rock, classical, and in the last twenty or so years, mostly jazz, as rock has waned, and you have to be in a major city to see a really good symphony most of the time.

So this past Thursday I flew down to see my Sis in Jacksonville and we went to the Daytona Beach International Festival (whose motto is 'Face the Music') with a wide variety of acts, mostly classical and jazz. We had tickets to concerts on Thursday and Friday night to see first Chris Botti and his band, and then the Yellowjackets with a stellar guest guitar player, Mike Stern.

I have, and have listened to, various Chris Botti CDs, most of which are decidedly in the smooth jazz or even pop category, and so I was mildly amused at his comment during the concert in which he distinguished himself from Kenny G, the ultimate snooze time smooth jazz artists. But then something unexpected happened--- I went to what I expected to be a smooth/snooze jazz concert, and a real jazz concert broke out.

This was in part because Botti had an incredible back up band-- including the ever funky Mark Whitfield on guitar and the Grammy winning Billy Childs on piano, plus a wunderkind on drums and a better than average bass player. The result was much jazzier versions of the Botti repotoire.

And in addition there was another surprise--- Botti appears on his CDs, and when he plays with Sting as a quiet, cool, sophisticated dude. Who knew he was Mister Entertainment in concert? He was alternately funny, playful, self-deprecating, and warm. When a group of people sitting down front waltzed in 30 minutes late he called them out, and then proceeded to play tiny samples of what they missed. It was hilarious. Boy were they put in their place. I must confess I really hate it when people come in late to good concerts, almost as much as I hate people talking loudly either on their cell or in person, especially during a quiet number. Why don't they have bouncers at concerts for rude and crude people who have no respect for the music, the musicians, or those who actually came to hear the music? I'm just sayin'....

The concert Friday night was vintage Yellowjackets who are still on top of their game and have added a whole new wrinkle with Mike Stern. Now Mike Stern is a very impressive jazz guitarist, who often sounds very much like early Pat Metheny, and that's the best compliment anyone could give him. He's a fine ensemble player as well. The Yellowjackets played mostly their new CD which features Stern. Speaking of featuring, it is mighty hard not to focus on Jimmy Haslip, the astonishing bass player (six string bass strung backwards as he plays it left handed), who is always impressive. He made Botti's bass player look very ordinary indeed. One of the highlights of the evening was Mintzer's long tour de force exploration of a ballad on the ewi, a truly versatile electronic woodwind instrument of sorts.

One of the more interesting aspects of these two concerts is that while the Yellowjackets drew a smaller but more knowledgeable jazz crowd, Botti attracted a lot of middle aged and older women who came to swoon over Botti and his love tunes. Chris was gracious, but it was funny to see all these women swooning over a much younger man who obviously was not interested in anything but playing and having fun, and being a good entertainer.

Nevertheless, a good time was had by all, and I can certainly commend the new Yellowjackets CD with Mike Stern, called Life Cycle. Its mighty good straight ahead jazz in a Yellowjackets kind of style, and no, they did not pay me to say this.
Posted by Ben Witherington at 4:19 PM

I'm over smooth jazz, but I'm a huge fan of Pat Metheny Group--and some of his solo projects, particularly Secret Story. Metheny is gracious and likable at concerts and in interviews, but he can be outspoken at times. For example I don't know if you read his rather vicious open letter to Kenny G. Not that what he said didn't have truth, but it was pretty unforgiving. I think he has leveled Lee Ritenour as well. I note from his site that Metheny is really embracing a lot of the fad atheism books and thinks they're very "important," which is a shame to me because his music works so well for worship for me. It is the most ecstatically spiritual contemporary music that I know of, thus I never grow tired of any of it. All this tangential to your post, but the Chris Botti thing made me think of it. I will certainly check out the YJ with Mike Stern; didn't know that had transpired.

Ben, see what you think of these political jazz songs:

Would like to have been there. sigh.
Suggs, interesting comments about Matheny, I am a fan, but his personal views on spiritual matters are very disturbing, along with his condescension towards others. I care nothing for Kenny G but I do like Ritenour; say what you want, the man can play. Matheny's music does seem to have an element of great longing in it, to my mind. I always wonder what certain artists would do if they had a conversion experience, as Bob Dylan did 30 years ago. Who knows?