MONSTER VS. ALIENS-- AND PRESIDENT COLBERT 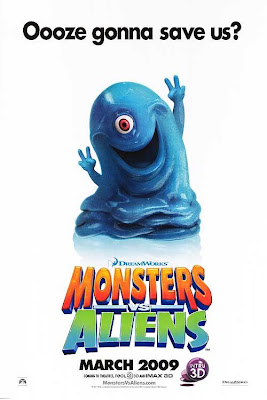 Perhaps you are too young to remember the Blob. 50s horror movies featured him/it, along with a host of unpleasant aliens (think the original and far better version of 'The Day the Earth Stood Still'). Shucks, someone in the 50s or 60s even dreamed up creating harmless green or blue goo which you could buy in plastic eggs replicating the consistency of the blob. Well that blob had no blog back then, and had generally faded from our collective consciousness until of course along came yet another Dreamworks movie for children, this one in snappy 3D, which features Bob, the blob. He's a loveable combination of the Wizard of Oz's tin man, a hulking but friendly middle linebacker, and a generally clueless brainless California surfer dude. Oh yeah, he has but one eye, and he falls in love with a quivering mass of green jello--- how appropriate. But I digress.

One of the keys to movie success in recent years is the making of clever or even smart kids movies that the children's parents will actually enjoy watching as well. Pixar and Dreamworks have made a bunch of and a bundle from such films, and they are still at it, quite successfully. All the homages to 50s aliens or monsters movies in Monsters vs. Aliens will of course be lost on the children, but will draw a knowing smile from their parents if they watch this PG rated flick stacked to the gills with familiar voices (e.g. Reese Witherspoon as Susan, and Stephen Colbert hilariously as the President of the U.S.A.).

There is even clever satire of how silly the American military always looked in those old B movies when combating the aliens or monsters or both. For example we have a General, who is generally a decent chap, even if he has a "shoot first" attitude and hair trigger, who is named W.R. Monger. But I digress again, rather like the plot of this movie, which is one big digression, err distraction.

The story is boy with massive ego meets girl, plans to marry girl but wedding is interrupted when bride is irradiated by falling meteor, which in turn makes her (rather than her beau) too big for her britches, which in turn leads to her capture and incarceration by said U.S. military where she befriends various monsters captured on previous military search and seizure forays... and said monster turn out to be the good guys when the aliens show up and try to take over. The mad scientist who is the leader of the monster pack turns out to be a combo of a cockroach and Errol Flynn..... but I digress..... again.

The technology is of course 'spot on' and a treat, though I have to say that the 3D effect was not as dramatic as when I saw U2 in 3D at the IMAX theater in dear ole Texas. The Edge gets the edge over Bob the blob by a smidgin. There are of course fun chase scenes, and rescue scenes, and imprisonment scenes, and giant bug scenes, and the military actually helps out in the end. But like a Marvel comic with twist, Miss Susan, seeking to be all she could be (whilst her former boyfriend was not desperately seeking Susan) decides she would rather be 'ginormous' and make a difference in the world than be married to Mister narcissistic newscaster. Whew... thank goodness. Eat your heart out Ron Burgundy.

This film is already well rated by many reviewers, but the truth is, while it is enjoyable enough, it doesn't have either the pizazz or poignancy of the Incredibles or Toy Story, or various other such flicks.

But Bob the blob..... he's worth oozing over to and getting to know. He's not a "one-eyed, one-horned flying purple people eater", but he sure does know how to slime people affectionately. If you are looking for about two hours of diversion with your children.... this one fits the bill and should settle in your cerebral cortex like a gelatinous mass :) BW3
Posted by Ben Witherington at 11:14 AM

I too saw Monsters last weekend and I came to pretty much the same conclusion, but with one difference: the 3-D was not worth the extra cash.

At first the effects were a rush for the sense of sight, but after a while, as the eyes become accustomed to it, the impact just disappeared. And for me personally, the medium left me with eye strain, a headache and upset stomach.

The story line was interesting enough, but the running time of the movie was just too long by about 15 minutes or so. Also, what started out as an homage to early creature features, such as "Attack of the 50 Foot Woman", "The Fly", "The Blob" and "The Creature From The Black Lagoon", with some witty and knowing dialog aimed at adults, soon became as boring as any other kids cartoon movie.

In retrospect I would have been better off seeing the non 3-D version.

Don't get me wrong, it WAS entertaining enough, but just not enough to encourage me to spend $12 on the next Pixar feature. Better left for DVD at $5.00 for the whole family.

Well it was only $7 here for 3D, but I agree with you, it wasn't that dramatic an ungrade from normal.

I thought this movie was just good, dumb fun. However, when I reflected on it, I realized how much I enjoyed watching Susan get her mojo. And when was the last time you saw a movie where the heroine outwitted the Bad Guy buy using her wits, rather than her brawn? (Hint -- Disney's "Mulan.") And she Saves the Day, along with the General and Insectosaurus, or shall we just say "Mothra."

When I was growing up in the 50s & 60s, I was one of those rare girls who *liked* comic books and monster/sci-fi flicks. But I really longed for one with a true heroine, and I didn't really find one (Supergirl and Wonderwoman didn't really do anything for me, for some reason). And in the movies, all the heroines ever did was shriek, faint, or become objects of lust.

Now I have Mulan, Buffy, Captain Janeway, Violet & Helen Parr ("The Incredibles"), and Susan. I am a happy woman.

I agree with you Julie, it did a good job of portraying a strong woman, and we need more such portrayals.