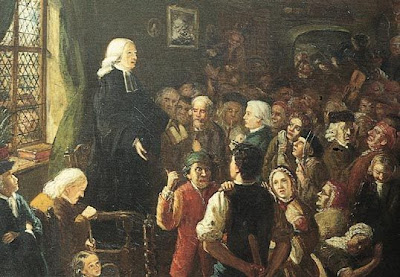 Once every four years, representative clergy and laity of every United Methodist Annual Conference meet to discuss and enact important legislation that thereafter represents the official stance of the United Methodist Church on issues as varied as theology, ethics, church polity, ordination, and a host of other topics. Unlike many other hierarchial denominations, neither ministers nor bishops can speak officially for the UMC. The General Conference is the official voice of the church, and it only speaks once every four years. Thereafter it is up to the Judicial Council to exegete and apply the official positions and disciplines of our church. We have what can only be called a frenzy of democracy for two weeks as we debate and settle legislative matters, and thereafter it is a matter of implementation until the next General Conference four years hence.

This year's meeting will be in Fort Worth Texas, and it promises to be no less interesting or controversial than many of these meetings. My good friend Ken Carter who is one of the leading pastors in the Western NC Conference going to that Conference has now posted a call to civil discourse at this forthcoming meeting, a call with which I heartily agree. Here is the link to his post, on his blog:
http://kenatprovidence.blogspot.com/2008/04/open-letter-to-2008-general-conference.html


There are many issues worthy of careful discussion, but in my judgment perhaps the one of greatest importance in terms of long term impact on our church is the question of whether Central Conferences should continue to be included as required attendees providing voting members at the General Conference meetings. Central Conferences are, for the most part, overseas Methodist Conferences which were founded by U.M. missionaries or other representatives of our church.

In my judgment it would be a huge mistake to disenfranchise these conferences and not allow them to come and vote on the important issues in our denomination. For one thing, they provide us with a whole variety of important cross-cultural perspectives on the global church, and our mission, helping us to continue to claim, as John Wesley did, "the world is our parish".

For another thing, they provide something of a theological and ethical balance to the American church which is too subject to the major cultural shifts in North America, often at the expense of the Gospel and the Bible's teachings. We not only need the two-thirds worlds voices at General Conference, we need their wisdom and votes as well. In an age when our church, and indeed most major denominations, are becoming more culturally inclusive and global in character, it sends the wrong signal entirely to not allow the Central Conferences to continue to participate fully and vote quadrennially with the rest of our church.

The cost of their attending should not be a major issue. If need be the American Church should provide all necessary subsidies. As I continue to travel around the world (leaving May 7th for Australia, Indonesia, Singapore, where I will preach and teach at the Methodist Annual Conference Meeting, and then on to Turkey, Russia, and finally my own Annual Conference meeting where I will be preaching and teaching June 10-13 in Greenville N.C.), I find that Methodism is alive and well in non-North American contexts, and it would be well if what Philip Jenkins and others have suggested would begin to come to pass-- that we would get more, not less leadership, of our whole church from the two-thirds world Methodist Churches, including our Central Conferences from Africa and elsewhere. Only so can we continue to claim "the world is our parish", and continue to fulfill the mandate John Wesley and Francis Asbury left for us beginning at that first Conference meeting in 1784 in Baltimore.

Posted by Ben Witherington at 7:26 AM

Ben,
There have been a lot of controversial issues at the General Conference but the issue of seperating from the rest of our brothers in Christ is probably the biggest one that has come about for me. I cannot express in words how dismayed I am that the Council of Bishops would even suggest this.

Ben, do you think this petition has a chance of passing and if so, what would be the consequences. One of the reasons that I have remained in the United Methodist Church is that I feel obligated to my brothers in the 2/3 world. I know them and love them and desire to see our church provide health care, education, and stand up for them in the world political arena. Our brothers and sisters pay such a heavy price for their tremendously vibrant faith and this is how we treat them? Maybe I misunderstand the purpose of this legislation but I just don't get it.

Some will see this as a Trojan horse piece of legislation in order to restore a more liberal order to the General Conference. I certainly do not believe this is the agenda of the Council of Bishops. I think they are genuinely concerned about the great cost of coming to General Conference for our overseas Methodists. But surely this could be remedied by the host country's conferences coming up with the money. I for one would gladly give to this cause.

Yeah,
I don't buy the conspiracy theories either. Cash is getting tight and this is a way to cut costs. I don't think this is the way to do it.
Sometimes I get weary of all the talk "in the realm of the flesh." If we truly put all of our efforts into proclaiming the Good News of the Kingdom of God, making disciples of Christ, feeding the poor, seeking justice in all arenas,etc., would we really have to worry about not having enough money? What kind of God do we serve?

Well, nuff' frustration. I still am glad to be one of those called "Methodists" and although it can be a pain I still see a lot of hope in our future.