Ehrman vs. Wright on the Problem of Suffering. Whose Right?

Excellent Discussion on the Problem of Suffering 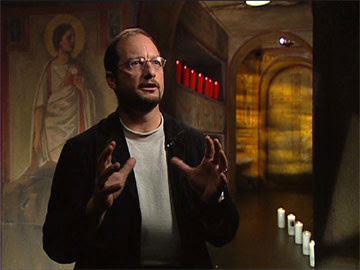 Beliefnet.com is hosting a fine "blogalogue" between Bart Ehrman and N. T. Wright on the problem of suffering. Ehrman, as you may know, has published the most recent installment in his series that might be called: "A Popular Scholar's Attempt to Get People to Stop Being Christians." This book is: God's Problem: How the Bible Fails to Answer Our Most Important Question–Why We Suffer. I have not read this book yet, but, given what I've read of what Ehrman has said about it, it certainly doesn't break any new ground. But Ehrman has the attention of the secular media (like NPR), and he's an engaging writer (for a scholar). So God's Problem will surely sell plenty of copies. (Photo: Bart Ehrman) 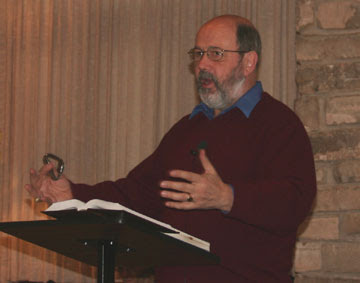 I can't think of anyone I'd rather have "blogaloguing" with Erhman than N. T. Wright. In this conversation, Ehrman is way out of his league, theologicially. More importantly, however, Wright's approach to suffering takes seriously the biblical narrative of salvation.

Here's what we have so far in the "blogalogue":

Ehrman: How the Problem of Pain Ruined My Faith

Wright: God's Plan to Rescue Us

Ehrman: What About the Actual Suffering?

Wright: What It Looks Like When God Runs the World

Posted by Ben Witherington at 1:08 PM

This debate has been quite interesting. Ehrman has painted the problem with broad strokes paying no attention to context. Wright has been polite.

I wish Wright would cut back on his minor projects and get back to his COQG series. We've been waiting 5 years now for the next book to come out.

Alex,
I'm torn on this issue. Whereas I personally would love to read the final two books in the series (it is going to be five right?), I also know that his "minor projects" are much more directly beneficial to the church. "Simply Christian" and "Surprised by Hope" will surely go down as Christian classics, and should.

Sarah said...
This comment has been removed by the author.
9:11 AM

Sarah, if you read the first post by Ehrman, you'll see that he didn't go from "disillusioned inerrantist" to rank unbeliever. He abandoned inerrancy and continued as a non-inerrantist Christian on the liberal end of the spectrum for 20 years.

And to Mark Roberts: If Ehrman is so "out of his league," I have yet to see much evidence so far. Ehrman has fired some pretty formidable salvos at Tom Wright. He's responded by pontificating to the choir. The Bishop's posts woefully are short on substance -- no "aha!" moments so far.

Let's be clear about a few things. Bart Ehrman's area of expertise is not the New Testament, it is text criticism of the early Christian manuscripts. Apart from the publication of his dissertation on the 'Orthodox Corruption of Scripture' Bart has hardly written any scholarly monographs. He is a popularizer, and I do not mean this in any derogatory way, since I write a good deal of those kinds of books as well.

I have yet to see any evidence that he is a serious exegete at all. He has written no commentaries on the NT whatsoever, no monographs on early Christianity, no serious theological works, not even his most recent popular level book on suffering.

He has certainly written no scholarly works of the magnitude or importance of Tom Wright's Jesus and the Victory of God, or his Resurrection and the Son of God. At a scholarly level of work, there is no comparison here.

This does not mean that Bart, as a much younger scholar, will not yet make his mark with his scholarly work, as he is certainly capable, and he is an able public speaker and debater, just like Wright. But then he is a much younger man than Bishop Wright, and he is so caught up in preaching to the general public and the educated laity that it is not clear he will ever get around to really engaging with other scholars at the rigorous and technical scholarly level.

Popularity with the general public however does not equal scholarly significance or signs of being a seminal contributor to the field. The judgment must still be out on that.

Most everything that Bart has written is a retred of more scholarly work, and mostly by others. His gift, thus far in evidence, is distilling the discussion at a more elementary and college textbook kind of level.

Oops. I meant to say "are woefully short," not "woefully are short."

Ben, I agree with you on Wright's exegetical credentials vs. Ehrman's. But this debate is about broad philosophical issues, not so much the precise meanings of particular texts.

A quick thought that I posted on the debate. It seems to be a matter of perspective. Non-Christian perspective:

"My view is that it is impossible to reconcile the pain and misery all about us – the millions of children in Africa dying of AIDS and malaria, the millions of others dying because they are forced to drink unclean water, the countless others dying from natural disasters (hurricanes, tsunamis, droughts, famine) – if there is a good and all powerful God in charge of the world." (Ehrman, http://blog.beliefnet.com/blogalogue/2008/04/thanks-tom-for-a-thoughtful.html)

"My view is that it is impossible to reconcile the pain and misery all about us – the millions of children in Africa dying of AIDS and malaria, the millions of others dying because they are forced to drink unclean water, the countless others dying from natural disasters (hurricanes, tsunamis, droughts, famine) – if it is all completely meaningless and there is no hope of freedom from it apart from death."

Exactly what kind or type or magnitidue of suffering might a Christian agree was potentially incompatible with the idea of a compassionate, just, all-powerful and all-knowing being?

So what kind of suffering, including eternal suffering, is NOT compatible with Christian theism?

I'd like to add that for centuries both Catholics and Calvinists agreed that the elect in heaven would PRAISE GOD at the sight of hell's eternal punishment. So it seems the "problem" of pain even became an ETERNAL BLESSING in their eyes!

P.S. That reminds me, I'd like to ask Ben Witherington what he thinks about being the "favorite author" of someone like J.P. Holding? Holding is a man from whom biblical genocides are no problem at all, and who argues from silence that the young people who called a prophet "baldy" (and who were immediately supernaturally cursed to be eaten by bears) were unspeakably worse young men than the story lets on; and who also argues that when Jesus spoke about being like a dove that "doves can be quite vicious." J.P. Holding defends the use of non-stop insults (that he calls "sarcasm," since he unfortunately doesn't know the difference between the two) during discussions of theology with anyone, Christian or not, who disagrees with him. That fellow claims that "Ben Witherington" is his "favorite writer."

I hope in future that as J.P. Holding reads more Witherington (and he will, since J.P. Holding has admitted he loves Ben's writing so much that even if Ben wrote a book on harmonica playing, he'd give it three thumbs up, his highest rating), let's hope J.P. Holding starts being inspired by Ben's cordial demeanor, especially toward Bart Ehrman, whom Holding holds in derision.

And Ben, I'm curious what you have to say about creationism contra Holding, and about inerrancy as well, since Holding remains a young-earth creationist (his "default position" as he says), and an inerrantist.

This isn't the most important thing in the world... but I just thought I'd point out that "whose" in the title should be "who's."

Thanks for sharing this with us!

Greg Boyd has been reflecting on Ehrman's book here.

He offers an interesting analysis. It's worth a click 'n glance.

He has been spending some time on the whole problem of "divinely-sanctioned war and violence."