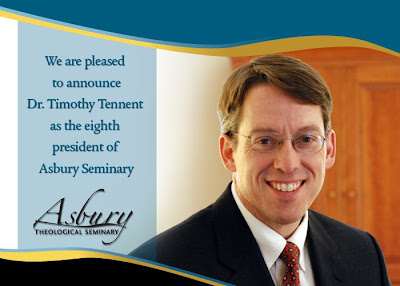 ASBURY SEMINARY ELECTS NEW PRESIDENT
WILMORE, Ky. (Feb. 17, 2009) – Timothy Craig Tennent, Ph.D., of Ipswich, Mass., has been elected the eighth president of Asbury Theological Seminary by the Board of Trustees. Asbury Theological Seminary, a private graduate school in the Wesleyan tradition with an enrollment of more than 1600 students, offers master’s and doctorate degrees in theology, biblical studies, missions and ministry studies.

Tennent, 49, comes to Asbury Seminary from Gordon-Conwell Theological Seminary in South Hamilton, Mass., where he has served as professor of world missions and Indian studies since 1998.

Dr. Dan Johnson, chairman of the Board of Trustees stated, “The board is very excited about the unanimous election of Dr. Tennent. Dr. Tennent is a scholar’s scholar, a professor’s professor. He is a world Christian with world vision who will take Asbury Seminary into wonderful new arenas.”

“I am honored to have been selected to be president of Asbury Theological Seminary,” Tennent says. “We are delighted to be moving to the historic and beautiful garden area of central Kentucky. My wife, Julie, and I have always said that wherever God sends us, we will go. God has taken us to China, India, Nigeria and many beautiful churches in the southern United States and in New England. Now we have the great opportunity to help Asbury work with a global constituency and play a stronger role in preparing ministers from around the world for God’s work around the world.”

He is also one of the first four graduates from a new leadership development program funded by the Lily Foundation and developed by In Trust, a nonprofit organization committed to strengthening boards and governance in North American theological schools.

The leadership training program “covered innovation in everything from theological practice, shared governance, fundraising, negotiating personal dynamics in education to working with boards,” Tennent says. “During the three-year program, I met with dozens of deans and many presidents from schools across the theological spectrum, and learned a great deal about many of the unique challenges that we are facing today.”

“I am alarmed by the growing trend away from serious theological reflection and do not believe that the church will be adequately prepared to face the challenges of pluralism and post-modernism without a more robust theological preparation,” he says. “I am also passionate about the emergence of the Majority World Church. I believe that the Western church continues to have an important role in global missions, in partnership with the increasingly vibrant Majority World Church.”
Posted by Ben Witherington at 12:18 PM

As a Gordon-Conwell grad, all I can do is mourn. Our loss is your gain.

Many congratulations to Dr. Tennent. I can't help but be sad though. Asbury's gain is Gordon-Conwell's loss!

Well as an alum of GCTS I feel your pain, however, the truth is we shouldn't feel this way. Are we not all members of the one Body of Christ? Do we not all serve the same risen Savior? Are we not all fighting, hopefully together, for the same cause? When a great general is transferred from one regiment to another to lead a different group of persons, the army has lost nothing, there has only been a shift in leadership of the one army--- in this case the true salvation army.