Honey I Blew up the Church-- Let's Hit the Beach 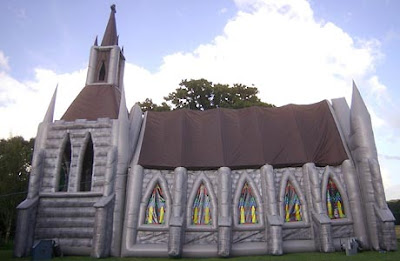 O.K., I did not see this story coming. It seems that in a desperate attempt to capture the Italian beach going public in August, nuns and priests are now transporting an inflatable 'convent', which blows up to 98 feet in length (now that's a lot of hot holy air) to the beach where persons can come and make confession whilst Christian musicians are luring them in with Christian tunes (I'm thinking they are singing in Italiano "I was sinking deep in sin, far from peaceful shore....").

Accordingly to the article there will be 'night time activities in the inflatable convent from 10 p.m. to 1 a.m. NOT INCLUDING MASS'. O.K..... besides singing and confessions what might be going on in the blown up church? Inquiring minds want to know. Well it seems they will be saying the rosary (see below).

It seems that people were blown away by the first attempt at this on Sardinia a couple of weeks back--- well actually the church had to abort itself as strong winds blew away the blow up church! Back to the drawing board.

Undaunted various nuns are excited about their new beach ministry. Here is a small quote from the Reuters article:

"On the Mediterranean coast, nuns from a convent near the southern Italian city of Naples have relocated to beach cabins to join holidaymakers saying the rosary. An adjoining altar was set up under two tents. [sounds like an in-tents ministry effort to me]

"The concept of a beach-convent is something that is appreciated by vacationers and the nuns themselves," priest Antonio Rungi, who helped spearheaded the initiative, told Italian news agency ANSA."

O.K. so now I am thinking what about an inflatable seminary at Myrtle Beach. We could do classes in recreational theology, beach ministry, practice being angels by para-sailing and could sing multiple choruses of "Michael row the boat ashore..." Anyone ready to enroll?
Posted by Ben Witherington at 9:33 AM

When you start your faculty search, let me know. I am more than interested!

You can see a picture of the actual church here:

That's one church that you would wish wasn't...wait for it...holy.

Ok, sorry, somebody had to say it.

A Presbyterian Church here in Cincy rented out the community pool every Sunday morning in July this year. Contemporary poolside worship at 10:30, free pool access 'til 1pm.

Wow... That is Emergent. Next stop, burning man.

Is it a common assumption in Catholicism that there needs to be a building for prayers and offered confessions? Is this building a claimed 1st century relic?

The “holy” joke, I thought was hilarious…

Dr. Witherington, may I ask you, if in your theology, there is a place for Christians to make regular confession of their sins?

Hi Brigitte, nice to hear from you. The answer is yes indeed, and especially in connection with communion. It is part of our ritual---

Thank you for your answer. I really did not know that.

Now, I don't understand that if Roman Catholics and Lutherans and Methodists believe in regularly confessing their sins, that we can't agree on "simul justus et peccator".
We pray daily that he forgive our trespasses, as we forgive those who trespass against us. It is ongoing.

Brigitte in fact what Jesus said was 'forgive us our debts.....' which is a rather different matter than praying about daily sins. The problem with simul justus et peccator is it assumes that it is impossible, even by God's grace to avoid willful conscience sin. This is frankly false, as 1 John makes clear.

Catholics going avant-garde! That is shocking, especially in Italy! (Speaking as an Italian) That is absolutely hilarious! Would there be danger that strong burning incense pots would melt or burn the material out of which the blow up church was made?

I think you misunderstand or else misrepresent the doctrine.

Nobody is talking about willful sin. I am not questioning your confession of sin either, whether it was willful or not. It is not the point here.

The understanding is that even while you may be doing a good thing, even from the heart, there is always this sinfulness that sticks with you. You may be feeding the poor, but you can't help feeling you are better than they, even if just for a moment, or that you are earning brownie points with God. You feel furious about your own attitude, yet there it is. This is just an example.

Anyhow, you'd think where ever Christians confess sins regularly, there would be an understanding of the continuing sinfulness even of the believing. This would be self-evident to me.

Brigitte the word translated 'tresspass' in the Greek literally means a willful sin. Not something that is a condition, not something is going through your head in a dream or accidentally or whatever. It means an action of the will resulting in sin. By contrast the word 'hamartia' could possibly refer to a condition of sin, as in 1 John 1-2. If we pray, as in the Lukan form of the Lord's prayer 'forgive us our trespasses' this refers to forgiveness for willful acts of sin. What makes this so significant is that in the OT, there was no atonement for 'sins with a high hand'-- willful premediated acts of sin, no atonement at all. This is why Paul in Acts 13 says we now have forgivness even for willful premediated sinning (i.e. trespasses), through Christ's death.

I'm not sure what purpose these distinctions serve in relation to the discussion.

What kinds of sins are YOU confessing and how often? (not in detail, that's ok :)

The extent of "willfulness" of a sin, can be hard to assess. We are often busy, lazy, genuinely tired, stressed, blind, thought-less. If it is not one sin that happens it is another. I can't constantly think about everything and get it all right, and I can't do all the things I think I should. I don't know to what extent something was neglectful, or stupid, or willful, or ignorant, or accidental, or habitual or ingrained. It just is and I am sorry.

I'd have to get a team of experts, like at the Bejing Olympics to come up with a exact score for each performance, each moment of my life. That was a 14.5 and that was a 16.75 (well done!!!), on various scales of difficulty, technicality, and so on.

I need to be right with God, and so I will say as often as I need to or come in his presence, forgive me my trespass/sin/neglect/attitude/selfishness/
I don't quite see how the exact definition matters.

Brigitte of course you are right that when we confess,we should indeed ask for forgiveness for any and all kinds of sin, of course, without necessarily having to name them all in detail.

Honestly, with me it is more a matter at the end of the day of confessing sins of omission as much as anything else.

But one thing that I think is important is realizing that not everything that we see as problematic is seen as sin by God. The Bible does not say for example "though shalt not be moody".

The purpose of confession is of course not to inform God about something God is ignorant of, nor to make God forgive us. That already happened objectively on the cross.

It is interesting to me to see the change in Luther himself before and after his Reformation. Before he was spending hours in the confessional. Afterwards, not so much. Indeed, he even gave one prince the advice--- "sin boldly".

I as a good Wesleyan would never agree with that.

do you think the "sin boldly" needs to be, perhaps, taken as a "RHETORICAL device"?
What do you think he meant?

I found this quote today. It ties together sinner/saint, confession, imputing, and changed life. I think you may be ok with the way "imputing" is used in this section. (I'm reading your Romans.)

"Sin remains in the spiritual man for the exercise of grace, the humbling of pride, and the repression of presumption. For he who is not busily at work driving out sin without a doubt has sinned by the very fact of this neglect, even though he has committed no further sin for which he may be damned. For we are not called to idleness; we are called to labor against our passions. These would not be without guilt--for they are truly sins, indeed damnable ones--if the mercy of God did not forgo imputing them to us. But He does not impute them (sins) to THOSE ONLY who manfully undertake the struggle with their failings and, calling upon the grace of God, fight it through. Therefore he who goes to confession should not fancy that he is laying down burdens in order to live a life of ease. On the contrary, he should know that by laying down the burden he is undertaking to serve as a soldier of God and is taking a different burden upon himself, the burden of battling for God against the devil and his own failings. The man who does not know this will suffer a quick relapse. Therefore he who does not intend henceforth to fight--why does he ask to be absolved and to be enrolled in the army of Christ?"

Luther always made use of and encourage the use of confession/absolution after his conversion, stressing its positive use and lack of coercion. Also, he says here that it is needful to seriously battle sin.

In terms of our sin and our own watching of ourselves, there is a danger on either side--to despair and to presumption. To fend off the despair he said: sin boldly. (Don't drive yourself insane. We know he's had experience with that. Live your life, instead.) To fend of presumption: don't sin on purpose. Fight the temptation.

"We should walk on the royal middle way and avoid sin. For although God has promised forgiveness, as Augustine says, He has not promised that you will certainly return after the fall. Thus neither Saul nor Judas returned. To apprehend grace does not lie within our power, and you do not know whether you will be able to accept the forgiveness offered. Therefore we should fear God, who hates presumption as well as despair...."

Can one accept God's forgiveness when one has done it on purpose? Will a person be able to honestly repent? No one is encouraging anyone to go out and do it.

Regarding the "sin boldly" I see footnotes: " the modern Catholic Joseph Lortz writes: "It is doing Luther a grievous injustice to take this sentence to Melanchthon as deliberately antinomian, as advocating moral laxness.... At bottom Luther's view expresses something similar to Augustine's statement: 'Love, and do what thou wilt.'" The only stricture of Lortz is that he calls the expression "in its paradoxical recklessness (?) a typically 'Lutherish' sentence."
(What Luther says. Plass. p. 1310)

So, it is not fair to use this sentence against Luther implying he is condoning conscious sinning. It is wrong for this to keep getting thrown out there. And it says nothing against "simul justus et peccator".

I think, there is fertile ground for Christian unity on that spot where Luther is standing.