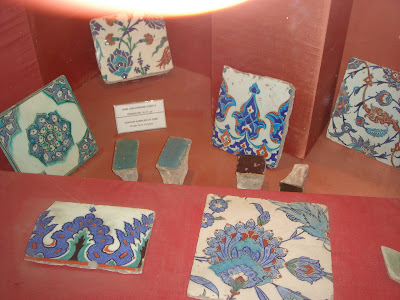 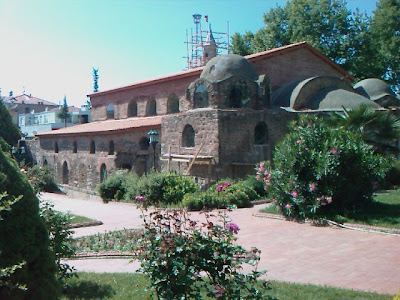 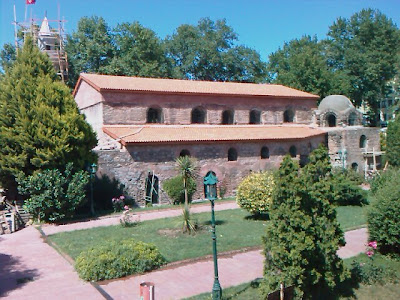 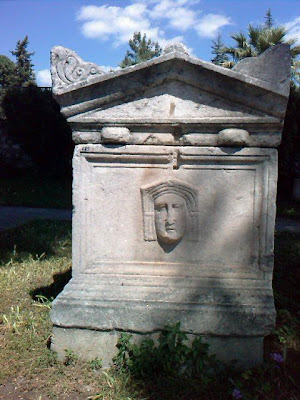 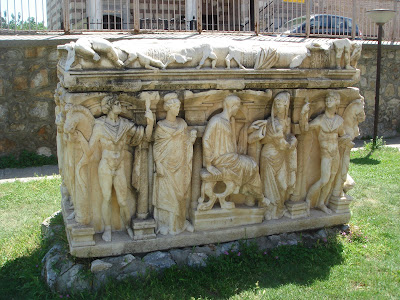 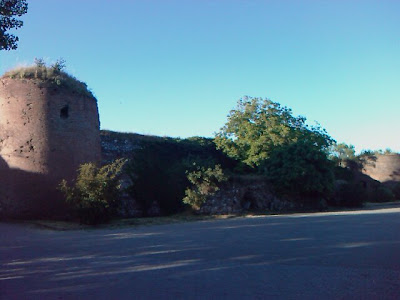 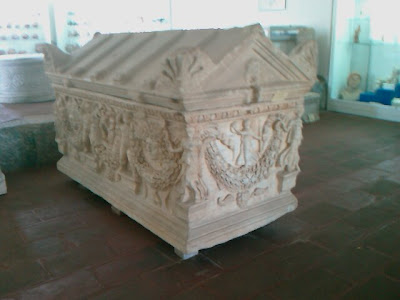 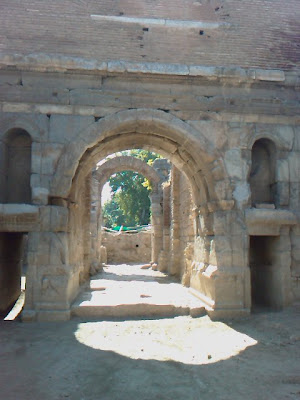 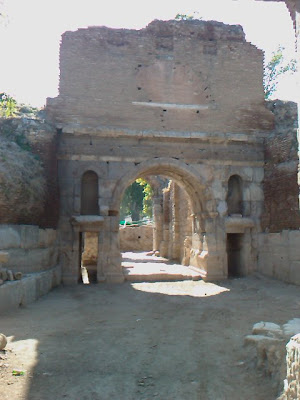 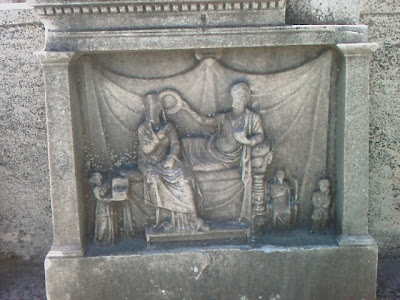 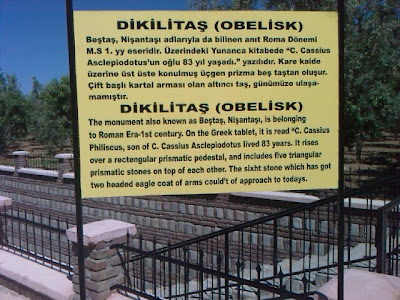 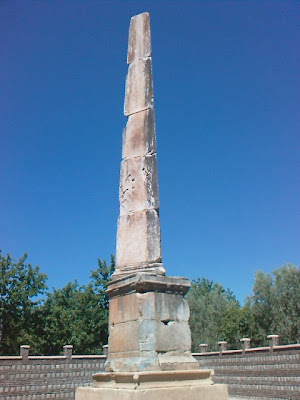 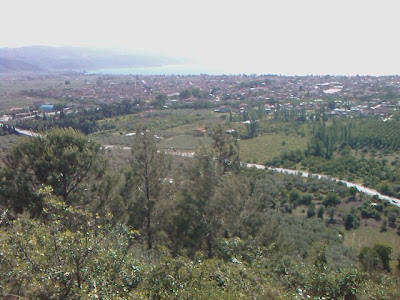 Nestled in the hills which surround Iznik lake is the beautiful small town (about 22,000) of Iznik. The unassuming tourist might well mistake it for just another little Turkish town, but in fact it is a city of great historical importance to the Christian faith, and also to the development of high art in the form of decorative tiles, bowels, and plates (known as Iznik tiles). But let us start with the ancient history. The town of Iznik was of great strategic importance to the Romans, so much so that they built huge walls around the town, had large plantations near by, and both Trajan and Hadrian had gates erected for this city. I have included a couple of shots of these gates which are still being excavated as we speak. The city derives its Greek name from the fact that two generals of Alexander, after his death fought in 301 B.C. over control of this city, and Lysimakos won, with the result that he named the town after his beautiful wife, Nicea. Unlike some cities which had to be captured by the Romans, and be subjected to seige, one of the last of the Greek kings of Asia, Nikomedes III ceded the town to the rising power, Rome, in 74 B.C. and it suffered no damage.

Nicea was often in competition with its neighboring cities to be the chief city, or 'capital' of the region, and it is a measure of its importance that Trajan and the governor of Bithynia, the famous Pliny the younger both undertook construction projects here, the later making a start on building a theater, which was unfortunately not finished due to earthquake, apparently. In fact, the whole city had been recovering for almost two centuries from a devastating earthquake in 123 B.C. and it was Hadrian who in fact gave the order that the city must be rebuilt. We see both gates and city walls still today from Hadrian's construction. And clearly enough important Romans lived there during the NT era as well, for we find a remarkable triangular obelisk that serves as a burial memorial to a Roman noble who owned a plantation just outside the city in the middle of the first century A.D. The many burial sarcophagi which are marble and highly ornate, attest to the considerable presence of socially elite Romans in the city during and after the NT era.

The archaeological museum in Iznik is well worth the visit, and it chronicles for us in detail the extensive Roman population in the region during the early Christian era. That Roman presence continued all the way through the whole era of the Roman Empire, and so not surprisingly Constantine, as the first Christian emperor saw this as a crucial city as well, and a good meeting place for the first major Christian council, after Christianity had been removed from the list of illicit religions, or 'superstitio', by Constantine. The first council of Nicea held in 325 A.D. brought together bishops from all over the Empire, including of course Bishop Arius from Alexandria who wished to maintain that Christ, while he had a nature like that of God's, nevertheless it was not the same divine nature or essence as God had.

Students of church history will remember the debate over the two words homousios (of the same substance) and homoiousos (of like substance), which Arius supporting the latter reading. This debate was heated, and is well chronicled in Ramsay MacMillan's recent slender but fascinating entitled Voting on God. The end result of the council of 325 was that it was declared that the Son shared the same substance or nature or 'ousia' as the Father, and at the same time shared the same substance or nature as a human being-- both fully divine and fully human. Among other things, the Nicean creed was the result of this council. It is important to bear in mind that Christological orthodoxy in regard to this matter was established before the closing of the NT canon in the latter part of the fourth century A.D. Orthodoxy in regard to Christology was seen as a more crucial issue than the limits of the NT Scriptures, though the two issues are intertwined.

Unfortunately for this city, earthquakes struck inA.D. 358, 362, and 368, ruining many of the monumental buildings and structures. Nevertheless, the seventh ecumenical council was held here in 787 A.D. a church which I have provided pictures of in this blog entry. The name of the church was Hagia Sophia, just like the much larger one in Istanbul. That council voted against iconclasm-- the destruction of icons and so-called 'images'.

During the Byzantine period, Nicea had briefly been the capital of the Byzantine Empire, and during the the 4th Crusade in 1204, after Emperor Theodoros had been expelled from Constantinople, he made his capital in Nicea.

Much later in its history, Nicea became famous for something else. During the Golden era of the Ottoman period, and especially in the 14th and 15th centuries, the city became prosperous due to the patronage of the Grand Vizier, and we find the origins of the famous Iznik tile and pottery in this period. I have provided one picture of some of this beautiful tile, which seems to have been the art which was to inspire the later European potters, including those who made the famous blue Delft pottery and tile. If you visit the famous Ottoman palace, the Topkapi palace in Istanbul, you will find whole rooms plastered with this beautiful tile. There is so much more I could say about this gorgeous city, and its hospitable people, but this must be enough for now.
Posted by Ben Witherington at 1:34 PM