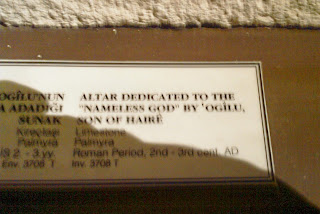 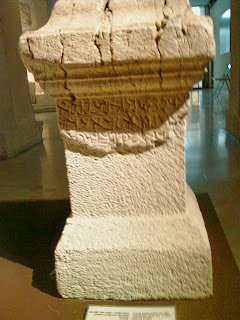 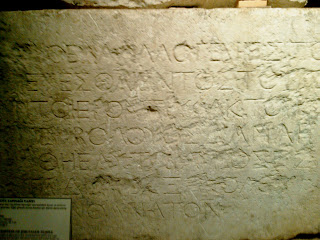 Museums are fascinating places for those who love history, and know what they are looking at! This post begins our tour of statuary, grave art, and stone inscriptions of relevance to NT studies which are found in the Istanbul Archaeological Museum. 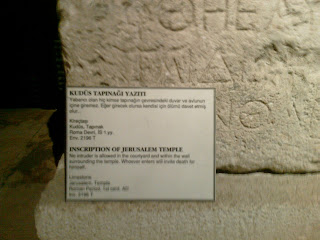 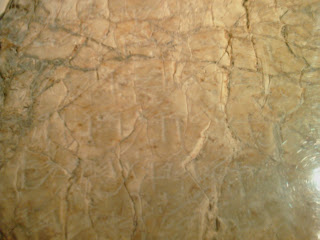 The first item which is of direct relevance to understanding the NT is the small altar from Palmyra with the inscription to the "nameless (and thus unknown) god". Scholars used to debate at length whether the reference in Acts 17 to altars for unknown gods was historically accurate, but they seldom do so any more not only because of finding altars like this one, but also because of the now considerable inscriptional evidence as well. Ancient pagans liked to have all their bases covered, since they were polytheists and were not sure on any given day who was blessing them and who was blighting them. Better to have a catchall altar to any gods they had not named just to be sure everyone was properly honored. The next two pictures take us to the actual temple in Jerusalem, and the famous inscription warning Gentiles to keep out of the inner sanctums of that temple. Yes, this inscription stone now resides in Istanbul, thanks to the Ottomans or even earlier Moslems who carted it off at some juncture. 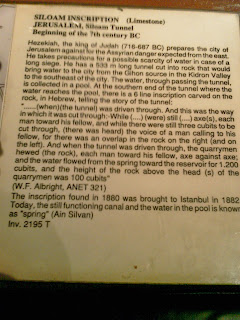 Below that is the famous Siloam inscription also from Jersalem and its famous tunnel dating back to the eight century B.C. You can just see the Hebrew in the middle of the stone, and the translation is hopefully readable in the following picture. 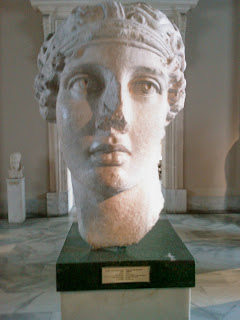 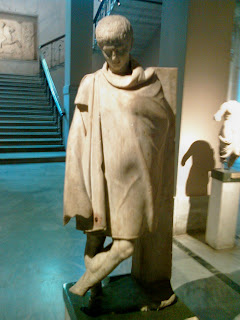 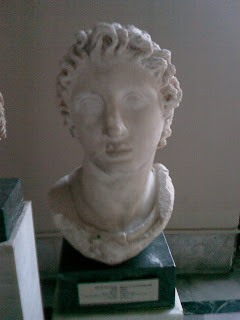 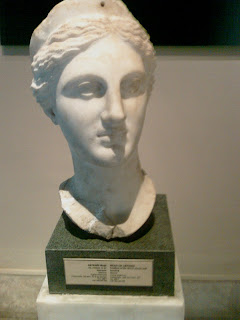 Graeco-Roman statuary and grave art were of course the main means of keeping the memory of a deceased person from slipping into oblivion. It also teaches us a great deal about the values, styles, and afterlife beliefs of the ancients. Few places in the world have a better collection of Graeco-Roman grave art and statuary than the Istanbul Archaeological Museum, in which a person like myself could get lost for days.

In this part of your tour of that famous museum we will concentrate on certain samples from the inter-testamental and NT period. Let us start with busts and statues.

In some cases all we have left is the head of a huge statue, such as the huge head of this high status woman. No one was likely to forget her. You will notice that almost all the statuary was done in marble, though sometimes it would be done in bronze (see the next post).

We are fortunate to have a full statue of an ephebe, a young boy in his toga and cape, showing appropriate deference (or indifference?) to the sculptor. To his right is a bust of the young Alexander the Great, nearly always depicted with hs head inclined a bit to the right.

The Romans tended to prefer more realistic portraiture, the Greeks more idealistic portraiture, with the result that we have a bit clearer picture of what ancient Romans looked like than ancient Greeks. At the top eschelons of society one finds many busts of women, almost as many as that of men. Here above is a nice example of a bust of a patrician woman, with prominent Roman nose. One of the things you learn a great deal about from such statues is women's hairstyles of the period, which is of direct relevance to the discussion of a text like 1 Tim. 2.8-15 where Paul critiques women who wear their hair piled up on their head with jewels woven into it. One can well imagine the effect of such a hairdo, if not covered by a head-covering, in a small room at night full of lamps. The woman's coiffure would have been a constant distraction, having the effect of an ancient disco-ball glinting in the lights. This is why Paul insists on women, especially high status women keeping their heads covered, as only God's glory, not human glory was supposed to show up in Christian worship, and a woman's hair was viewed then (and often now) as her own, or if married her husband's glory.
Posted by Ben Witherington at 5:31 AM