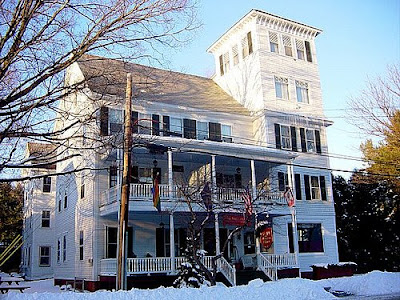 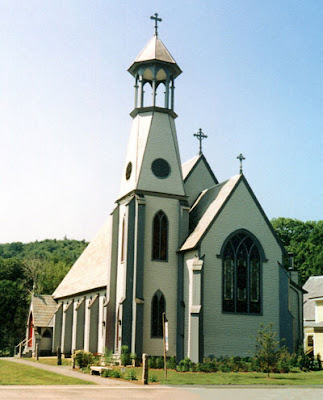 O.K. so what do you do when its below 0 and you have cabin fever? Well, you get in the truck and head to other warm buildings where there is food and company. I did this twice in the last two days seeking out both terrestial and celestial food and company.

What you see above at the top is the Inn at Saxton's River and St. Luke's Episcopal Church in Chester Vt, both really warm places, but also really cool-- if you catch my drift. I went on Saturday night to the Inn for supper and absolutely was not disappointed. The locals had commended it to me, and they were right. After getting reacquainted with Mr. Adams Winter warmer, I then had some good ole New England Clam Chowder (to be pronounced CHOW-DUH) with bacon and potatoes in it which really hit the spot. Picture me by a warm Victorian fireplace in a nice big overstuffed chair overstuffing myself. The chowduh was followed by the main course which was bacon-wrapped scallops (a personal favorite). If you're coming to New England and you don't eat seafood you are missing the best of the native cuisine, and that's a fact. This was scrumptious and it came with another personal favorite from the old South-- sweet potatoe fries, cooked just right and light. Then this temptress of a waitress waved various earhly delights known as desserts in front of me, and since I felt I deserved my just desserts since I had spent the day slaving away over a hot laptop, I chose something I had not consumed in 20 years--- a hot fudge sundae. And there was no fudging with this sundae-- it was a delight. Feeling like a stuffed turkey thereafter, I waddled out to the truck and drove the seven miles back home to Grafton, where a cup of incredible Obsidian coffee awaited me (kudos to Caribou).

This morning when I awoke, it was naught minus 5 degrees but crystal clear blue sky and no wind. I figured this was coming last night when I notice a zillion stars out including a huge Venus or Mars or some such planet. Remember when you used to go camping away from the city lights, and you'd look up at night and see all of the heavenly host, instead just the bright ones you'd see in town? Well, up on the moutain overlooking Grafton is like that--- nearer my God to thee.

I was determined to go to church this morning, and St. Luke's Episcopal pastored by the rector the right Rev. H. Paul Brannock-Wanter is a splendid little Evangelical Episcopal Church where the Gospel is duly preached and the sacrament properly administered each Sunday. I was there with some 30 other souls who were huddling together trying not to be God's frozen people, and so singing lustily and praying fervently, and in general enjoying the time to be together in the Lord's presence. The sermon was based of course on the lectionary texts which included Jonah 3.1-5,10 and Mk. 1.14-20.

The lectionary is of course a good news and bad news thing. Sometimes there is an obvious connection between the texts for a given Sunday, sometimes not so much. But this Sunday there was an obvious connection as the minister made apparent in the theme of repentance-- Jonah preaching to Nineveh, a pagan city (perhaps the only time in the OT God really ordered a Jewish prophet to do this) and the call in Mk. 1 to repentance as the Kingdom was at hand.

I was struck by the way the service began. Rev. Paul admonished us all to be in holy silence before the Lord, and prepare our hearts for worship. This is as it should be, as I am writing in my new book on worship--- "let all mortal flesh keep silence, and ponder nothing earthly minded". There needs to be a sense of the sacred as we come into the Lord's presence and we should not do it haphazardly or ill-prepared.

As with all normal Episcopal services we got the full service service--- complete with liturgy, prayers, the creed, the sermon, four Scriptures, offering, lots of hymns (I only knew one of them), and the full Eucharist. It was an embarassment of riches, as they say. There was plenty to savor, and of course one especially came to savor the saviour who was present with us. I shall certainly go back here next Sunday. Sometime this week I hope as well to go and visit Weston Priory, a holy place tucked back in the hills near Weston, where prayers and praise, 'ora et labora' have been going on and going up to God for many years.

The story of St. Luke's is interesting. First built about 1868 after the Civil War it was built as a deliberate response to the rampantly growing and spreading Unitarianism in New England. Accordingly, this church emphasizes the Trinity both in its architecture and in its liturgy. In the sanctuary it has Trinitarian crosses and the big huge O's in the rafters as symbols of the eternal Trinity. It also has Trinitarian themes in its rose window and above the altar, and has a beautiful old Victorian organ with painted pipes. Unfortunately, it was too cold to meet in the sanctuary so instead we gathered in the basement below where it was wonderfully warm.

Remember the cry of the old prospectors as they explored the hills-- 'there's gold in them thar hills!" Well, it kind of feels like that here in the Green Mountains of Vermont. There is of course the stunning beauty of God's general revelation in creation, but there is also God's special revelation in the small gatherings of the saints here and there. But then, when you have villages of only 300 or so souls, its bound to be a small gathering of souls isn't it? And that is just fine, since Jesus said he would drop in 'wherever two or more are gathered...' You don't need to be in a mega-church to meet our Mega-God.
Posted by Ben Witherington at 9:21 AM

Thank you for sharing your New England experience! I can almost feel the chill in the air and taste the scallops. From my vantage point in sunny South Florida, it seems like an ideal place to think and write. I am green with envy, or maybe that should be “snow-white” with envy. Enjoy the chowduh!

Oh..what a wonderful post. It is below zero here this morning too (Wisconsin) but I'd rather be where you are. Thank you for sharing.

I'm glad you are having such a good time in our neck of the woods! For my money, you cannot beat Vermont in the winter (except for, perhaps, fall - and maybe summer on the Maine coast). I'm assuming that you have been, or will get to, Woodstock? It just happens to be the most charming town in Vermont - especially this time of year!

If you are in Chester, you are about an hour from there, I would guess (due North). You are also just a stone's throw away from one of my congregations.

I love Woodstock was there in the summer but haven't visited in the winter yet. Going to Weston Priory tomorrow.

I hope you had fun at the Priory. Did you get to the Vermont Country Store in Weston?