To Ur is Human 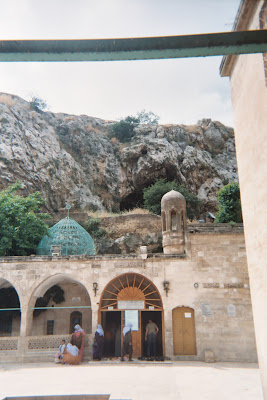 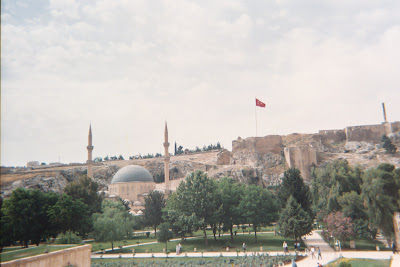 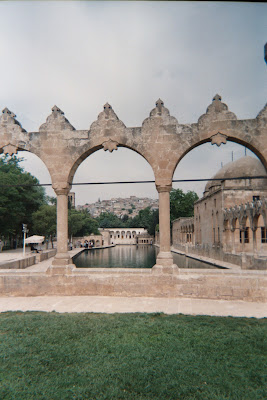 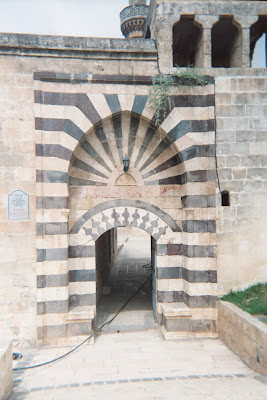 The town of Shanli-Urfa is an interesting one. According to Islamic tradition it is the locale of the cave of Abraham. Above you will find a picture of the entrance to the cave, followed by an overview of the citadel that towers over that part of the town, followed by the arches leading into the sacred pool (full o0f enormous and enormously pamper fish) next to the cave, followed the black and white entrance way into the park and the mosque next to the pool and the cave.

According to Islamic tradition, Abraham had a mighty battle with the Devil and the powers of evil on top of the citadel and was thrown off the cliff into the pool below, but the fish held him up and prevented him from drowning, hence they became revered and sacred fish ever since. When I went into the cave of Abraham, there was an old man in there praying. I wish I could have taken his picture. He had on a white prayer cap, had a long white beard, and could have been an image of Abraham himself.

Alas, for all these traditions they probably have no basis in history. The Biblical Ur of the Chaldees was likely a long way from Urfa, somewhere in Iraq. If you read Gen. 11.27-32 carefully it suggests that Terah set out from one land, went to another where Haran was, on the way to Canaan. If you were journeying from Turkish Urfa to Haran today it would be a journey of about one or two days maximum, and in Abraham's time it would not be a journey away from the land of the Chaldeans to Canaan by way of Haran. In other words, Gen. 11 suggests a journey from the fertile crescent region to Haran, not from Urfa to Haran. If this is so, then of course all the Abrahamic traditions associated with Shali -Urfa are not historical. They are the products of later Islamic tradition. It seems they erred about Ur.

And this brings up an important point. People are often asking me-- Do all these historical details really matter? Does it really matter where Abraham was born and married? Does it really matter where Haran is? And so on. Well yes indeed it matters a good deal 'if' the Bible is making historical claims about such things. The authority and inspiration of the Bible is at stake in such matters, if the Bible is making historical claims. Likewise with Islam, when Islamic tradition makes claims about Abraham, if they are not grounded in history, then they have no real basis, and are not true. Christianity like Islam, like Judaism is an historical religion-- a religion based on certain truth claims about history. Of course not all history is equally important, but the point is that when the Bible makes a claim about history, then it should be considered important by us. What do we actually learn about history from a trip to Shanli Urfa (the name means beautiful Urfa)?

Below you you will see two steles. The first was found near Urfa and is the stele of an Assyrian king shaking hands with a deity apparently. This seems to be either Ashurbanipal, or it might be Nabonidus. Below that is a Greco-Roman grave stele found in Urfa. Both of these monuments are in the little Urfa museum. The Roman stele is interesting because it has the top of a temple with a rosette in it above the eagle. This is close to what was found at the Talpiot tomb which we blogged about sometime ago, and shows this was a common architectural design used with tomb art, and that it depicts a temple cornice. In short there can be no doubt that Urfa is in the middle of territory where many historical figures of importance to Biblical studies passed through, and many cultural artifacts have been found that help us in a general way better understand Biblical culture. But as for Abraham having a battle with the Devil or an evil angel in Urfa--- not so much. This is a later tradition which was meant to give special sacred status to this town of Urfa. Think on these things. 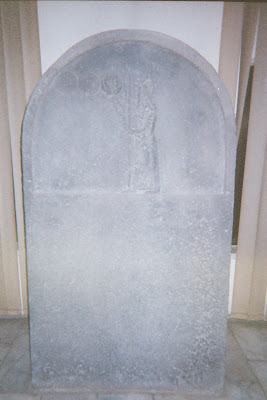 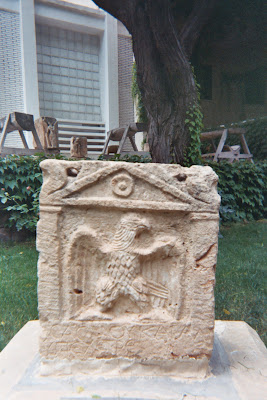 Posted by Ben Witherington at 5:22 AM

I agree passionately that when the Bible makes historical claims, we must treat them as such. Because of that, I struggle with the lack of archaeological evidence for the Exodus. So much of salvation history hangs on the historicity of the Exodus, and archaeologists didn't start looking for supporting finds just yesterday. Should I be content to affirm by faith such a gaping hole in the historical record, saying that since Jesus really came out of the tomb, I believe the Exodus really happened?

Nick I have no idea what you mean by a gaping hole in the archaeological record. We would hardly expect there to be much evidence for the presence of slaves in Egypt. They are the unmentioned people anyway. There is of course inscriptional evidence for the 'Hapiru' there, and further there is the interesting Aminhotep stele which mentions Israel which is in the Cairo museum. The grain cities mentioned as well in the Bible are known to have existed. There is Moses name (compare the name Ra--Mses) and other little evidence. We certainly wouldn't expect any evidence of the exodus event itself any more than we would expect to find archaeological evidence for nomads of any kind from the period. They traveled light, they didn't build buildings, they weren't craftsmen etc. In short absence of evidence is not the same as evidence of absence.

Dr. Witherington, thank you for sharing the pictures and all the history of your trip. I find them fascinating, and they give more depth to my knowledge of the Bible and its history.

When a military force large enough to have corralled and subdued the Israelites disappears in one fell swoop, it should have left a hole in that nation. Where is the evidence, archaeological or otherwise, that an army of that size just vanished? Where are the replacement conscriptions, for one example?

That's the sort of thing I don't see in investigations into the historicity of this major salvation event. If you drop a boulder into a pond, you don't see the boulder; you see its effects on the pond. Where are the effects of the Exodus events on the nation of Egypt?

I appreciate both the pictures as well as the interesting tidbit that at least some Muslims associate Urfa with Abraham. I was surprised, though, that you didn't bring up Urfa's rather rich history as a major center of early Christianity in it's earlier 'incarnation' as Edessa.

Here is an interesting tidbit-- the son of Ramases II, who followed him as Pharoah is mummfied and can be found in the Cairo museum. Yet his mummy is different from all the rest in being white. It has a high saline content. Could this reflect the fact that he drowned? Hmmm.......