'Out of the Mouths of Babes'-- "Lead us not into temptation, but deliver us from email." 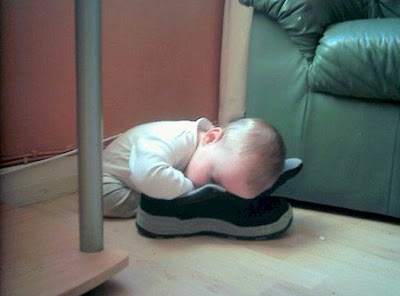 KIDS IN CHURCH
3-year-old Reese: "Our Father, Who does art in heaven, Harold is His name. Amen."

A little boy was overheard praying: "Lord, if you can't make me a better boy, don't worry about it. I'm having a real good time like I am."

After the christening of his baby brother in church, Jason sobbed all the way home in the back seat of the car. His father asked him three times what was wrong. Finally, the boy replied, "That preacher said he wanted us brought up in a Christian home, and I wanted to stay with you guys."

I had been teaching my three-year old daughter, Caitlin, the Lord's Prayer for several evenings at bedtime. She would repeat after me the lines from the prayer. Finally, she decided to go solo. I listened with pride as she carefully enunciated each word, right up to the end of the prayer: "Lead us not into temptation," she prayed, "but deliver us from E-mail."

One particular four-year-old prayed, "And forgive us our trash baskets, as we forgive those who put trash in our baskets."

A Sunday school teacher asked her children as they were on the way to church service, "And why is it necessary to be quiet in church?" One bright little girl replied, "Because people are sleeping."

Six-year-old Angie and her four-year-old brother, Joel, were sitting together in church. Joel giggled, sang, and talked out loud. Finally, his big sister had had enough. "You're not supposed to talk out loud in church." "Why? Who's going to stop me?" Joel asked. Angie pointed to the back of the church and said, "See those two men standing by the door? They're hushers."

A mother was preparing pancakes for her sons,Kevin 5, and Ryan 3. The boys began to argue over who would get the first pancake. Their mother saw the opportunity for a moral lesson. "If Jesus were sitting here, He would say, 'Let my brother have the first pancake, I can wait.' Kevin turned to his younger brother and said, "Ryan, you be Jesus!"

A father was at the beach with his children when the four-year-old son ran up to him, grabbed his hand, and led him to the shore where a seagull lay dead in the sand. "Daddy, what happened to him?" the son asked. "He died and went to Heaven," the Dad replied. The boy thought a moment and then said, "Did God throw him back down?"

Amen to that one Brother! My email was stuff with hundreds of spam mail some time last week. moreover, my internet went out for two to three days.

Fantastic! I'm a big fan of the 'hushers'. The Christian version of bouncers, I guess...
And I hope God doesn't throw me back down from heaven...
And that's why God made children.

Dr Witherington: A question that's entirely off topic. Regarding your book on James, co-written with Hershel Shanks.

I was conversing with someone who holds to the James-the cousin of Jesus theory, and John 19: 26-27 was used in defense of the cousin theory. The person said Jesus, while hanging on the Cross, "gave" his mother over to someone who wasn't James. The implication of this, purportedly, was that James could not be the son of Mary because common Jewish practice was that the next son in line takes over care of the mother. In your book, you do discuss this passage in John (page 105 of 2nd edition), but you do not address this point specifically. If I missed this point, my apologies. Thanks for any help.

The answer really is quite simple: 1) Jesus said that his primary family is the family of faith (see Mk. 3.31-35); 2) his brothers did not believe in him during the ministry as is perfectly clear from John 7.1-5; so 3) Jesus bequeaths his mother to his spiritual son-- the Beloved Disciple, a Judean disciple of Jesus who lived in greater Jerusalem (hence 'he took her into his home' as Jn. 19 says).
My view would be that this is Lazarus.

P.S. The brothers of Jesus are never called his cousins in the Gospels, unlike John the Baptist, and they are always hanging around Mary in the Gospels as well and are called brothers and sisters in that context (see Mk. 3 and 6). There was a perfectly good word for cousin and it is never used of James et al. Ergo, these are surely the children of Mary.

When my daughter was three she prayed, "Give us this day our daily popcorn."

I hear quotes like these on a regular basis working with the children in the church. It is one of the many reasons why I love the fact that God called me to children's ministry.

You are so right in ur response about James. The Mark passage is crucial because it shows more that his Physical family rejected him, not vice versa.

Blessings to u Dr.W as U follow the Lords path,
LGMIII

P.S. ur quite the funny guy with those quotes of Da "BABES".

Hi Ben - off topic - I found this speech by Sam Harris to be another knockout punch against religion.

Have any response to him and his books, or know anyone who does?

Every debate I've seen him be a part of, he absolutely blows the other person out of the water. I'm wonderin if there' anyone who can give a compelling reason why should organize our lives around ancient literature that didn't take shape until decades after Jesus' death.

love the last one :)