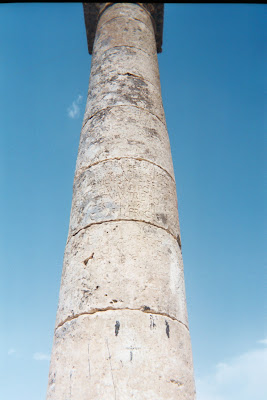 How exactly did the Roman army, in about 200 years conquer the then known Mediterranean world? Was it because they were better fighters than everyone else? Well, it seems clear that they were not usually as fierce as the Gauls, nor were they as good at cavalry and archery as the Parthians. What was it that gave them the edge?

Firstly, they were the best organized armies on the ground in general, and usually the best equipped. But secondly, and more importantly, they had the best engineers and engineering skills. When you actually traverse the ancient world and see the remarkable roads, bridges, aqueducts, siege ramps and the like built by Roman engineering, you have to be impressed. Above you will see an honorific column which stands on the big bridge depicted below. The big bridge depicted below is still used and usable after 2,000 years, which is more than I can say for the longevity of most similar constructions in America.

Who built all these remarkable roads and bridges? The soldiers themselves. This is why the honorific column above lists the legion involved during the time of Trajan and Nerva (i.e. late first early second century A.D.) who were proud of what they had accomplished. They knew that armies could not fight where they could not march, and so building incredible roads and bridges was a key to their conquering any country, but especially one as rugged and mountainous as Turkey. 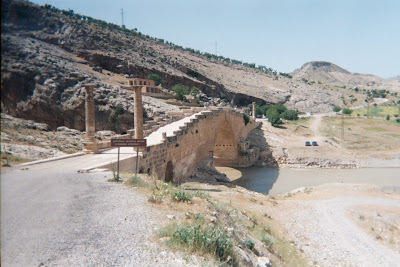 What did they use for construction materials? They used good solid very local stones. Do not picture them hiking distances hauling huge rocks which then had to be hewn into building stones. The Romans were far too practical and sensible for that. The Romans were also far too practical and sensible to have an all volunteer army--you need a majority of trained professionals to do what they were doing, and they needed to have multiple skills. The Roman engineers' accomplishments make our army corp of engineers look ordinary most of the time. If the Roman corp of engineers were around, New Orleans would have been totally rebuilt a long time ago. Of course, they would have deliberately moved the whole city well back from the levies and the lake before they rebuilt the city, forcing the whole town to move further inland. 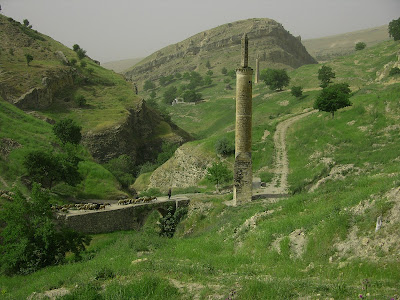 What you see just above here (enlarge the picture and look more closely) is a small bridge being traversed by a shepherd and sheep, right next to what is likely a watch tower. You can see another watch tower further along in the distance as well. This little bridge is crossing what is left of one of the tributaries the mighty Euphrates in eastern Turkey, after all the damming. The Romans didn't believe in building anything shabby. They built it to last, because they planned to rule forever (Roma aeterna). This is what comes from thinking and dreaming big and then acting on it with adequate skill.

There is a marvelous book on Roman bridges published by Cambridge U. Press (the oldest press in the English speaking world, with which I am proud to work). It is by Colin O' Connor, and it has many wonderful drawings of these bridges and roads which can be found everywhere from England all the way to eastern Syria and beyond, and from Spain all the way to Egypt and beyond. Unfortunately this book, entitled in good practical Roman fashion "Roman Bridges" is out of print and hard to come by. It lasted far less time than did the bridges described therein.

One of the things most impressive about Roman engineering is attention to detail and order. These folks were left brained to a fault. When you stand on top of Masada in Israel and look down at the still visible remains of the siege ramp and the siege camp of Flavius Silva you realize you are looking at engineering greatness. You can see it in these bridges as well-- they knew materials, angles, edges, inclinations, arches etc.

They didn't hire out to the lowest bidder! They didn't skimp on the right materials! They took the time to build things right. When they needed a road to go somewhere they did not take no for an answer. We could learn a lot from these folks. And above all they were almost always practical. They didn't build things for artistic effect-- they built it to be sturdy and last and take a lot of wear and tear. I could go on, but this is enough. They knew that attention to detail in regard to the small things was important. They could have invented the famous 'gradatio' saying---

I never cease to be amazed at the construction of the Romans. I don't think you cant stand in the Pantheon in Rome without a sense of wonder. Then realize that it is made of concrete and is nearly 1,900 years old. Amazing. Also consider that much of the water in modern Rome still travels in the aqueducts built in the first two centuries A.D.

In defense of modern engineers, one reason our bridges need repair more often than Roman bridges is the type of traffic they support. Most Roman bridges don't carry heavy trucks moving at highway speeds. Those that do have usually been reinforced to carry the extra load and vibrations.

I used to dream of building custom homes and buildings that would last centuries without what seems like nearly constant care that our houses and buildings require today. It seems, however, that the buying public doesn't really want that. I suspect where I live this is more extreme than many places but houses that are more than 40 years old are routinely torn down to build larger, fancier houses (closer together) with all the "modern conveniences". Some of the houses being torn down need a lot of work but others are in pretty good shape. Spending the extra money to build a house that will last 500 years seems a bit silly, however, when the next owner is just as liable to raze it as to live in it.

I think it says more about our values as a culture than about the skill of our engineers and builders. Sad, I believe, but true.

Thanks for that fun post! Those pictures are almost as brilliant as the work that your talking about here, and I agree that the Roman constructions, as we still see today(amazingly) are simply phenomenal--fascinating too.

Ben, you won't get any argument with me concerning Roman engineering, but I would put a bit more weight on Roman military tactics and strategy as part of their success. Granted the army had to get where it was going, but once it got their they were the masters on the field of battle.

Thanks for the great photos and commentary. The is an old saying in the military, that I first heard from General P.X. Kelly when he was Commandant of the Marine Corps:

"An army fights on its stomach."

Transport of men and supplies, training, and equipment are all equally important to the success of the Roman military. We've omitted one key facet of their strategy for long-term success, though.

Crucifixion. They owned it. They did it. When Rome came in, some examples were nailed up for the locals to see and understand the lesson that if you stand up to Rome, this will happen to you. Crucifixion does wonders for keeping the peace.

And I agree with Harvey that our society's craving for MORE MORE MORE that requires heavy trucks, coupled with its rejection of anything that lasts, speaks VOLUMES about hopelessness and desperation.

I wonder if you are aware of the recent report by Hershel Shanks on archeological forgeries. As it turns out, many scholars are predisposed to see the James ossuary as genuine (without, however, connecting it to Talpiot), see pp.7-14. I take that to be a vindication of your own work on the subject.

There is a spiritual analogy in what you have written to believers today. It is noted, pondered and effectual, Ben.

Yes I have read Hershel's article, and since he was the co-author of the book we wrote on the subject I am of course pleased with this vindication. Hopefully more is to come.

This is Lance. I think I've left a couple of voice messages on ur voicemail. I have one question for u now: do u SEE what i'm seeing? Maybe we should talk in the future face to face, but I just can't make it to your abode at this time.

Jeff Wooden said...
This comment has been removed by the author.
9:05 PM