The Beehive Houses of Haran 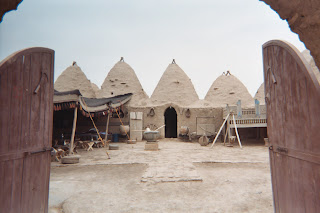 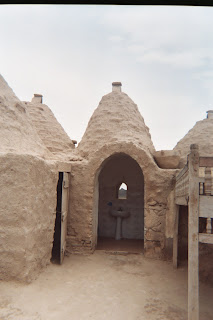 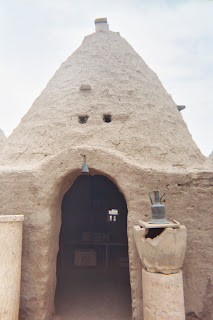 The beehive houses of Haran are an interesting study in ancient domiciles. In some ways living in them is like living in a cave-- moderate temperature in the summer, warm in the winter without any sort of heating or cooling devices. We do not know for sure what sort of house the family of Abraham lived in whilst they resided in Haran, but it certainly could have been something like these mud brick houses in the shape of beehives. These houses are one step up from nomadic tents. Once inside the house something else comes to light of Biblical significance--- there are tents still being used inside, usually in the courtyard to protect from the sun, and the cloth is made of cilicium-- goat's hair cloth, which comes in two colors-- jet black and various shades of brown, as shown below-- 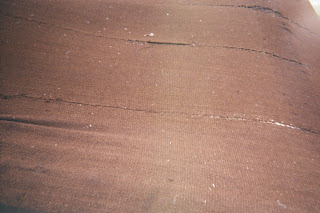 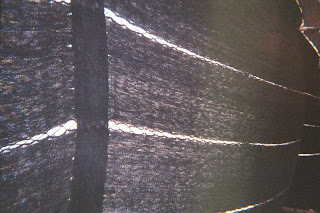 This is precisely the material Paul used to make tents, and his family before him. Indeed, Tarsus is in the center of the textile area where tents were made-- Cilicia, from which the material cilicium gets its name. One of the mistakes often made when one learns that Paul worked with his hands with cloth and leather is to assume he was a blue collar person. This was not the case. Indeed, his family in Tarsus had been granted the prestigious Roman citizenship, probably for their service to the Empire-- namely making tents and leather goods for the Roman army. Very few Jews were prosperous or prominent enough to be granted such citizenship, and of course Paul inherited it from his parents-- he was born a Roman citizen.

Jews had very different views of working with one's hands than did patrician or well-to-do Romans who saw it as beneath their class and dignity. Not so with Jews, who had a very high view of all sorts of hard work. Clearly Paul's family stood in this tradition.

It is noteworthy that Paul practiced his trade only sometimes once he became a missionary. On other occasions he accepted patronage and hospitality. The different practices in different places depended on how patronage was viewed, for instance in Corinth. There Paul's possible patrons seem to have assumed reciprocity applied, and Paul could not afford entangling alliances, or making promises to patron to be their in house teacher for the foreseeable future.

So Paul did ply his trade in Corinth, and there was another and missional reason to do so as well-- the Isthmian games were held there, and travelers to the games would be needing tents. And so one could say Paul sometimes had an 'in tents' ministry. But it is equally clear from Rom. 16.1-3 that Paul could and did accept patronage at times, and did not always support himself when he did his evangelistic work.

On the one hand Paul believed that minister's deserved to be paid. He did not agree with some of the mistaken theological notions that today often come under the 'tent-making' ministry banner. Paul, like Jesus, believed a workman is worthy of his hire. He also believed he had a right to refuse support, if he felt it was coming with stipulations or requirements for some sort of pay back.

Paul no doubt worked in the shops in the agora in Corinth, and it was likely there that he met high status persons like Erastus who came calling as the city treasurer wanting to collect a tariff or rent or the like. Thus Paul was able to mix business with evangelism it would appear. What is interesting is that while Paul could have set up a tent or a tabernacle for Christian meetings, instead they met in the homes of their more well to do members. This got them off the streets, but still the meetings were open to strangers wandering in, as the reference to the 'idiotes' the uninitiated person who wanders into a tongue speaking secession and thinks the practitioners are mad in 1 Cor. 14.

If one studies the social context in which Abraham and Paul lived, one gains a lot more insight into their spiritual and theological remarks. For example, in 1 Cor. 5 Paul draws an analogy between a tent, like he made, and the human body. Both are temporary and vulnerable domiciles subject to decay, fray, wear, and tear. Paul was not a person who would have said something like 'a man's home is his castle'. No, it's but a temporary and mobile dwelling place on the way to the resurrection body. So whether you lived in a tent or a beehive, you knew perfectly well that this world as it is was not your home, you were just passing through on the way to the new heaven and new earth, with a stop off in heaven along the way, if the Lord tarries.

Maybe it would do us well to redefine the word home-- maybe we should say "home is where the Lord is". For he has been our dwelling place in all generations. Maybe we should place less stock in our culture in buying and building the perfect house, and more in building the perfect life with a sturdy relationship with God and others. Maybe we should stop looking for the building of temple in Jerusalem and spend more time being the temple of the Holy Spirit. Maybe we need an extreme makeover in the whole way we view what is of lasting value in life, and what is a mere roof over our heads. Think on these things.
Posted by Ben Witherington at 12:37 PM

"On the one hand Paul believed that minister's deserved to be paid. He did not agree with some of the mistaken theological notions that today often come under the 'tent-making' ministry banner."

What do you think specifically those mistaken theological notions are?

Amen. I am reminded of the old bluegrass gospel song by the Monroe brothers, Mansions for Me - "There's folks building homes as cute as can be, their leveling their yards and planting their trees. But my little hut, I'll just let be for Jesus is building a mansion for me."

That missionaries must always raise their own support, would be one such mistaken notion, and a second would be, that they need to have a day job to pay their expenses while doing missionary work.

Thanks Ben, it's good to learn more about life in tents :)

Your posts in the past few weeks about cultural and historical issues surrounding the Bible have been really instructive and helpful. Thanks Ben!

Thanks Ben. I learn a lot from you.

A friend of mine spent years in central Asia and Africa and met my in-laws in Afghanistan (before I was born, actually). He was something of an inventor and was intrigued by the construction of beehive shaped structures. It turns out that a big reason they are built this way is that they can be constructed without any support to hold up the roof as you build upwards. Many are built "by eye" and some of them collapse but if built right, they can last for centuries, using only gravity to hold them together. He developed a system of measuring rods that could easily be used to construct one so that the roof was sloped the optimal amount to give strength. I've always meant to build one although in my climate fired bricks would be a better choice than sun-dried, mud bricks.

As for the theology of tent-making, I think those raising their support in the form of contributions are specifically NOT tent-makers. I know there are a lot of folks who call that tent-making. Nevertheless, it seems that raising support (for whatever reason, and I don't disagree with those you give) was exactly what Paul was avoiding by earning money making tents.

I can see both advantages and disadvantages in the practice of missionaries raising their own support. Tent-making, however -- a missionary working in a secular job to provide his or her own support -- can be a real advantage to those who desire to work in a country closed to traditional missionaries. So, rather than seeing it as having "to have a day job to pay their expenses while doing missionary work" you can see it as opening doors to places that might otherwise be closed. Just a thought.

I agree totally with your last paragraph.Amen