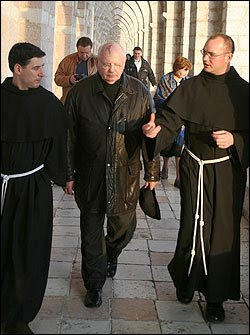 "I'll believe Jesus rose from the dead," said the angry Communist, " when the atheist leader of the Soviet Union becomes a Christian." These remarks, of course were typical during the years of the Soviet Empire and the Iron Curtain. Teenagers in America today hardly realize what a remarkable change has happened in Russia since the early 90s. Indeed it is nothing short of miraculous, and I have had the privilege of observing this first hand while teaching from time to time in Moscow.

And now comes this story about which I can only rejoice. Mikhail Gorbachev, the last Premier of the Soviet Union and the man whom President Ronald Reagan implored "Mr. Gorbachev, tear down this wall" when he was in Berlin is now openly testifying that he is a Christian. Below you will find the link to the story in the British Paper the Telegraph.

Perhaps most interesting of all is the influence of St. Francis of Assisi and his writings on Gorbachev in this whole process.

The Lord is by no means finished with us all yet, and the rise and flourishing of Christianity once more in Russia and elsewhere in the former Soviet bloc countries is a clear sign of the moving of the Holy Spirit.

The last time I was in Moscow there was a huge Christian rally at the downtown convention center which once held the large Communist rallies. Instead, there was a charismatic worship service, complete with American and British praise songs now being sung in Russian--- 'Slava Boga' (Russian for 'Praise the Lord'). There were hundreds and hundreds of young people singing at the top of their lungs. Only the coldest of Christians hearts would not be moved to tears by such a sight. Some day the day may come when Russia becomes a more Christian nation than the U.S. of A. for the Spirit moves where it will. In the meanwhile, I am thankful for all the signs of Christianity rising from the ashes in Russia even now. It must have something to do with that empty tomb in Jerusalem and the one who vacated it :)

The garden of Russian Christianity is watered by the blood of thousands of (mostly Orthodox) New Martyrs.

I am moved to tears just reading about these events. Thank you for writing about them. He is risen indeed.

COOL BANANAS!!!
Another whole heap for the Kingdom!

Interesting post. Thanks. No way we Ameri's can know what it's really like to live in a repressive regime, as so many Christians face in our world today.

My grandfather did some mission work in Russia pretty soon after it had opened up, so I'll definitely have to pass this along to him. This is nothing short of amazing, and I'm certain he would appreciate it a lot. Thanks for passing this along. It is truly great to see God at work in the world. I would not be too surprised to see the greater part of Christianity moving from the continually secularizing west to the seemingly more open east. As we are closing doors, it seems more of those countries are opening them.

I likewise have spent time in Russia and am excited about the growth of Christianity in the country and in the city of Moscow. Thanks for the update. I believe Gorbachev was used by God just like he used Cyrus the Great in the Old Testament who unfortunately never became a believer in the true and living God.

My wife did a photo shoot with Mikhail Gorbachev late last year while he was in Dallas speaking at the University of Dallas. She just had this feeling that he was a Christian. She will be really excited to hear that her hunch was correct and that Mr. Gorbachev is our brother!

Sorry... The personal pronoun for the Spirit, being God, is "He", not "it".--The Spirit moves where He will.

We do believe that God acts in history and what a comfort that is. He has a (very) long range plan.

Having grown up in Germany the stories of suffering imposed by both Communism and Nazism were ever held before our eyes. It was not easy to digest or live with or grow up with.

Thank God for the help he provided. Pray the rest of Europe would renew its faith.

My theology professor said it would be ok becaues Gorbachev's grandmother had him baptized. This was in the late 80's. Though the right wing pundits give Reagan credit for the fall of the Soviet Empire, it was Gorbachev from the beginning. Mrs. Thatcher had said that we can reason with this man, which these pundits poohed. She was right.

Hi Brigitte: It's interesting about your correction. While I quite agree that the Spirit is personal and indeed the third person of the Trinity, in fact in the Greek which we find in John 3, the Greek word is pneuma, a neuter noun (neither male nor female), and thus it properly takes the term 'it' not he, especially since the Holy Spirit is not a male. So the language dilemma is this-- how to convey in English that the Spirit is personal and indeed a divine person, without conveying the notion the Spirit is a male. This is a probable with English, which is inadequately gender inflected.

So I am afraid you are both wrong and right--- the proper translation here in John 3 must be "the Spirit blows where it wills" especially since the word for Spirit, wind, and breath are all the same in both Hebrew and Greek (Ruach or pneuma) and Jesus is drawing an analogy between the Spirit and wind.

I meant 'this is a problem with English...'

Lots of interesting things going on in the former Soviet realm. Many of them are bad things, but there is undoubtedly much spiritual revival going on there.

Technically "Bog" means "God" and not "Lord" in Slavic...

Unfortunately, Gorbachev denied this news. He said he remains an atheist, though he was baptized into Russian Orthodoxy at childhood.

You can use Google translate to get the English version.

RE: the Spirit's personal pronoun.

Pneuma may very well be a neuter noun, which no doubt any theologian who has studied Greek would know (not me). The languages I know (besides English, which does not have genders for nouns, as mentioned), all have the Spirit as masculine (der Geist, Spiritus, L'esprit). This does not exactly "matter, since the Holy Spirit is not really wind or breath (analogies) or anything with molecules.

All the catechisms in my house (Luther's small and large and the Catholic) have the Holy Spirit as
"He".

For example, Luther's small (on the third article of the creed): "I believe that I cannot by my own reason or strength believe in Jesus Christ, my Lord, or come to Him; but the Holy Spirit has called me by the Gospel, enlightened me with His gifts, sanctified and kept me in the true faith.

In the same way He calls, gathers, enlightens, and sanctifies the whole Christian church on earth, and keeps it with Jesus Christ in the one true faith.

In this Christian church He daily and richly forgives all my sins and the sins of all believers.

On the Last Day He will raise me and all the dead, and give eternal life to me and all believers in Christ. This is most certainly true."

Personally, I think, that a phrase such as "The Holy Spirit works where He wills" stresses the autonomy of the Holy Spirit. He is not someone(not something) to be manipulated by us. And He is potent. He certainly should be implored and begged off (remembering that "He" works through means), but He wills.

I think this autonomy of the Spirit is what you meant when you employed the phrase. When we say "He" (in English) the phrase more strongly conveys this strength and autonomy than using "it". When we see the Spirit as "Lord", I think it is somewhat demeaning in English to say "it" and usually a slip of the tongue.

If Gorbachov is not a Christian after all, we shall all pray the Spirit to bring him to faith in Christ.

What do you think of the Pope baptizing the Muslim on Easter eve? That's an interesting story to watch.

Yours, for today. Brigitte.

According to the latest news (March 26, 2008), Gorbachev denies he is a Christian and claims to continue to be an atheist.