FRACTURED FAIRY TALES FROM THE FARM NO. 1 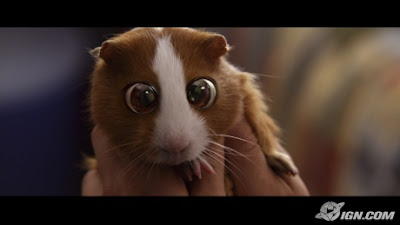 Meet the Nauga, a species not of gerbil, hamster or guinea pig but of its own, and indigenous to America! The Nauga is known for its bug-eyes. The Nauga, unfortunately today, the day after Earth Day, has to be reported as an endangered species, oddly enough endangered by the Barca Lounger.

You see it takes an enormous amount of pelts to produces a naugahyde couch or reclining chair. In fact Sam van Pelt and Joe Hyde from PETA reckon that it takes over 1,000 Nauga's hides to produce such a product. The plight of the Nauga was recently brought to national attention by the Disney film 'Bedtime Stories', in which a genuine Nauga masqueraded as a guinea pig and family pet. It was an Oscar worthy performance but sadly there is no animal category at the Oscars.

Where do Nauga's come from? They appear to have originated in the northern peninsula of Michigan which explains why it is that so many loungers and recliners have historically been made in Michigan, including Lazy Boy Recliners.

The Nauga, interestingly enough is actually a carnivor, preferring cheese burgers to all other foods, which explains why the Nauga tends to be portly. Ranging in color from brown to white and splotchy versions in between, it is estimated that today there are less than 500 Nauga's still out there in their native habitat. This is of course why the latest PETA campaign to save the Nauga from being hunted to extinction involves printed bumper stickers which read in large black letters NAUGA! HIDE! Unfortunately Nauga are illiterate.

Sadly the Nauga has not yet been put on the endangered species list, but President Obama made a campaign promise whilst stopping to garner votes from environmentally conscious "Yoopers" (that's Upper Penisula folk for the unenlightened) to get right on having the Nauga listed.

Unlike the hamster or gerbil or domestic mice, the Nauga is not good on treadmills, which also helps explain its portly physique. In fact the Nauga likes nothing so much as to lie around all day, swilling beer and eating cheese burgerettes-- BK burger bites being a new favorite. Female Nauga's apparently are very turned on to male Naugas with BK Burger bites in their paws.

The Nauga has in fact become so domesticated that one can regularly find them dumpster-diving with the opossums behind a Wendy's or a Burger King. Their current favorite flick is 'Super-Size Me'. I suppose it is sort of poetic justice in the 'you become what you eat' category that Naugas who like to lounge around are being made into naugahyde loungers.

What is to be done to save the little Nauga? My suggestion would be to stop buying naugahyde chairs and loungers altogether. Go for the straight plastic ones like good and smart-shopping red necks usually buy. Plastic at least does not come from a harmless little animal, and as we all know, plastic, like cockroaches, endures forever, so its good value for money and can be passed down for generations.

In our next episode we intend to tackle another animal worry--- namely why are sheep so dumb! Hint: Someone, as of yet unidentified, is stealing their ram memory. Also, we will address where SPAM comes from, and why Hawaiians eat so much of it.
Posted by Ben Witherington at 8:01 AM

People from the Upper Peninsula are known as "Yoopers," not "Uppies."

Admittedly, I'm saying this as a Lower Peninsula "troll,*" but we Michiganders actually call residents of the Upper Peninsula "Yoopers," not Uppies. :)

*Yes, troll. We live under the Mackinac Bridge.

Too funny!
Reminds me of a fantasy Aussie creature - the "drop bear".
Poor unsuspecting tourists are warned to be very careful walking in the bush, because the "drop bear" (a kind of frenzied koala on steroids) will drop down on them from the trees above and attack!

Ah, Lynne; you think yonder Ben is but jesting. But we of the older ilk remember a day when free-range Naugas had just been discovered by modern science; when our playmates had lovely stuffed replicas which we coveted deeply - and look how valuable they have become!

And now the poor little blighters are nearly as extinct as the forest snipe.