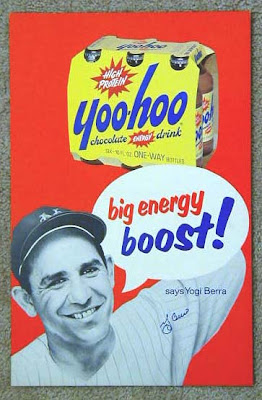 America's continued idolizing of major sports figures goes on apace, and unabated, even with the recent steroids scandals and the like, with athletes and even coaches now commanding enormous salaries. In economic times like these, it might be wise to recognize that such sports figures are in fact seldom role models, except perhaps for how they perform certain athletic tasks or skills.

If you ever need to be brought down to earth in regard to sports figures, the following quotes will serve you in good stead. Check it out. If it weren't so sad, it would be funny. These quotes make Yogi-isms look like classic lines from Shakespeare.


1. Chicago Cubs outfielder Andre Dawson on being a role model: "I wan' all dem kids to do what I do, to look up to me. I wan' all the kids to copulate me."

2. New Orleans Saint RB George Rogers when asked about the upcoming season: "I want to rush for 1,000 or 1,500 yards, whichever comes first."

3. And, upon hearing Joe Jacobi of the 'Skins say: "I'd run over my own mother to win the Super Bowl," Matt Millen of the Raiders said: "To win, I'd run over Joe's Mom, too.

4. Torrin Polk, University of Houston receiver, on his coach, John Jenkins: "He treats us like men. He lets us wear earrings."

5. Football commentator and former player Joe Theismann, 1996: "Nobody in football should be called a genius. A genius is a guy like Norman Einstein."

6. Senior basketball player at the University of Pittsburgh : "I'm going to graduate on time, no matter how long it takes."

7. Bill Peterson, a Florida State football coach: "You guys line up alphabetically by height." And, "You guys pair up in groups of three, and then line up in a circle."

8. Boxing promoter Dan Duva on Mike Tyson going to prison: "Why would anyone expect him to come out smarter? He went to prison for three years, not Princeton ."

9. Stu Grimson, Chicago Blackhawks left wing, explaining why he keeps a color photo of himself above his locker: "That's so when I forget how to spell my name, I can still find my clothes."

10. Lou Duva, veteran boxing trainer, on the Spartan training regime of heavyweight Andrew Golota: "He's a guy who gets up at six o'clock in the morning, regardless of what time it is."

11. Chuck Nevitt, North Carolina State basketball player, explaining to Coach Jim Valvano why he appeared nervous at practice: "My sister's expecting a baby, and I don't know if I'm going to be an uncle or an aunt."

13. Shelby Metcalf, basketball coach at Texas A&M, recounting what he told a player who received four F's and one D: "Son, looks to me like you're spending too much time on one subject."

14. Amarillo High School and Oiler coach Bum Phillips when asked by Bob Costas why he takes his wife on all the road trips, Phillips responded: "Because she is too damn ugly to kiss good-bye."
Posted by Ben Witherington at 1:11 PM

I know this isn't a vote but the second quote would be difficult to beat in my mind (which is all there even after brain surgery). As for number 14, I've been wondering why Don wants me to go to all the Chapel Hill football games (and sometimes the away Carolina games as well). I feel lucky though so I'm not going to worry about motive.

Joe Theissman actually had a Norman Einstein in his life...