ON LOVING YOUR CELL PHONE TO DEATH 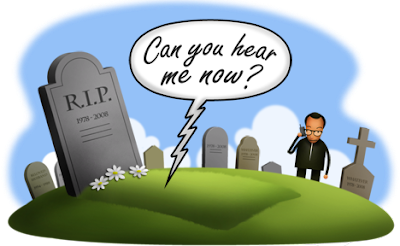 In the latest you've got to be kidding, in funerary trends, funeral directors are now telling us that people currently under 40 are increasingly requesting to be buried with their cellphones, or in some cases with their Ipods or Xbox games.

“It really started happening within the last five or six years,” says Frank Perman, owner and funeral director of Frank R. Perman Funeral Home, Inc. of Pittsburgh, Pa. “But I expect it to grow exponentially, especially with the price of technology getting so low. It’s not that big of a deal to bury somebody’s cell phone.”

The notion of staying connected also seems to play into being buried with one’s mobile. In an article worth reading by Diane Mapes at http://www.msnbc.msn.com/id/28182292//wid/11915829?GT1=40006 we find the following quotes:

“I’ve seen people leave cell phones on and tell me they’re going to call their loved one later,” says Vetter. “Not that anyone will answer, but they want to have that connection. I’m sure the family gathers around the phone when they call. They feel connected with that person because it’s their phone, but at the same time it helps them realize that a death has occurred.”

"When Manhattan criminal defense attorney John Jacobs died in 2005, his wife, Marion Seltzer, not only buried him with his phone and a fully charged battery, she continues to pay the monthly phone bill and even calls him on occasion (since the battery’s now dead, the calls immediately go into Jacobs’ voicemail)."

I would suggest that among other things this reflects a hope for, and even in some cases a belief in the afterlife, however weird the conception of it. But if it is a manifestation of a delusion, namely that the person is not really dead and gone, then its not a healthy thing.

This practice of being buried with a cellphone could have come in handy in the late Middle Ages in Ireland when heavy drinkers sometimes went comatose from drinking too much from lead tumblers, resulting in lead poisoning leaving the person apparently dead. Precisely because people weren't sure if Uncle Ian was dead or not, they would lay him out on the table in the parlor for a 'wake', to quite literally wait and see if he would awake. By the way, having the body in the parlor in the home is where the phrase funeral parlor originally came from. But when a sufficient time had elapsed, Uncle Ian would be buried. Unfortunately, sometimes real drunks were buried alive, only to wake up under ground. This was discovered in one Irish county when an ancient graveyard had to be moved. In moving a casket, the lid came open and fingernail scratches were found on the inside of the lid of the wooden casket. Thereafter, a string was tied to a finger of the deceased, and if it twitched, it would ring a small bell in the graveyard. Such a person was called a dead- ringer, and it was also said that he was 'saved by the bell'. But what if the person awoke at night, when all were sleeping? To remedy this problem, the church would put someone on night watch for a couple of days in the graveyard. The person was said to work, 'the graveyard shift'.

At Christmas, when we try to get to the bottom or source of things, even grave matters, it is apparently comforting to some to know that we can be buried with our technology, It would have been better to have had one's cellphone send an instant text message to Jesus upon expiring. The message would read--- 'Here I am Lord, beam me up', or perhaps, "Construction completed, thanks for your patience. This person ready for immediate pick-up.Lord have mercy."

That is incredibly sad to me. I don't find it too bizarre, for people have always done illogical things with the deceased for sentimental reasons. But I think there is something sad about our culture if our technology has become that... personal.

It's strange but also a great opportunity for ministry. Therapists use dolls to get children to talk about painful subjects, and I believe a sensitive friend or pastor could find a way to use this new tradition to invite a mourner to life in Christ.

Come on now. That's a bit too much. In the olden days I have read of people asking to be buried with their favorite copy of book---like the Bible or the Quran.

I did enjoy the humor in the article though.

I believe that when a loved one passes away, they are able to somehow "see" what we are doing and are aware of our presence, even though we may not be aware of theirs. If I want to talk to my grandma, God bless her soul, I visit her grave and say a few prayers and complain about whatever it is that's bothering me at the moment. I'm sur she can hear me, even without a cell phone.

Once I was feeling very lost and feeling rejected. I saw my grandpa in my dream. He comforted me. I really believe that he was somehow brought to "awareness" that I was sad and he wanted to let me know that he still cared, even from the other side of the world.

When we leave this world, I think we go into another reality or plane of existence, we are not really dead.

Howdy Lingua.... I am well aware of this. Could you really not tell this whole post was an exercise in humor not a rumination on historical facts????

So a lot of people like to be buried with objects they find meaningful, which somehow links to their conception of the afterlife, so what else is new? Archeology has supplied plenty of evidence that this has been going on for ages and ages. If anything, such developments indicate a certain speculative theology about the relation of technology to the afterlife, a subject that would make a fascinating point of inquiry to the theologian. If our technology has become very personal in our time, that is because their designers have made it so they can be as personal and integrated as we wish them to be. If anything, then, this is a sign that we are moving away from the impersonal and dehumanizing technologies of the industrial revolution and toward more personal and humanizing technologies.

"And when I die
I don't want no coffin,
I've thought about it all too often,
Just strap me in behind the wheel
And bury me with my... mobile?"