GRAFFITI AT THE SBL ! 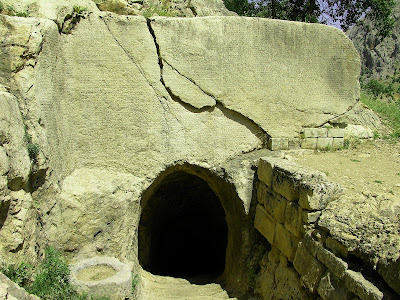 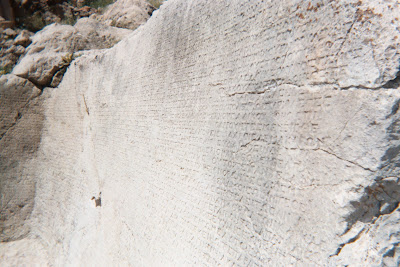 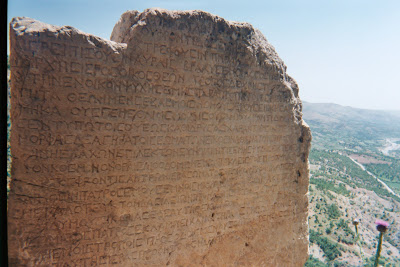 Certainly one of the most fascinating of all the seminars at this year’s national Society of Biblical Literature meeting held in Boston was the Graffiti Seminar. A series of papers were given, including discussions of recent findings of very early Christian graffiti in Izmir (=ancient Smyrna). We should deal first with the issue of definition. What counts as graffiti? Do ancient political advertisements for candidates painted on whitewashed walls count as graffiti? Or does the word graffito imply something clandestined, something possibly illegal, like the defacing of a building by modern graffiti artists in major cities in the U.S.? We could debate endless what does and doesn’t count as graffiti but if we take the broad view then we learn that there are several basic types of graffiti: 1) advertisements for politicians or for various sorts of businesses, often for the sex trade or for the sale of property; 2) religious comments of various sorts, usually about and for minority or even illegal religions or philosophies. We can also distinguish between graffiti that is meant to be timely and therefore is not put up in a semi-permanent way (e.g. painting on a wall) and graffiti that is meant to have more of a shelf life (e.g. something inscribed into stucco or even into stone or brick of some sort). One thing that immediately comes to light, and comes as something of a surprise, if not a shock is the vast amount of graffiti in a city. For example, there are some 10,000 political advertisements found in Pompeii alone! One wonders if they lamented as we do about the amount of ‘billboards’ besmirching the beauty of the landscape. If we count all kinds of graffiti in Pompeii, there seems to have been more writings on the wall than inhabitants within them. Methodologically if we combine the graffiti evidence with that from official and public inscriptions on tombstones, columns, walls, as well as the evidence on ostracons (e.,g. pottery shards with writing on them—‘made by Publius’ etc.) it may suggest a higher level of literacy than previously suspected in the Greco-Roman world. Normally estimates are between 10-15% of the population could read and write, but perhaps this is a somewhat conservative estimation.

In my judgment there is a difference between ability to read, and ability to write. Reading seems to have been a more wide spread skill than writing in the first century A.D., otherwise it is hard to understand the proliferation of all the official propaganda from the time of Augustus on. Writing was more of a specialized art, especially when it involved inscribing things, requiring a proper scribe or artisan. Surely the assumption of the propaganda of inscriptions, dedications, epitaphs and the like is that a significant number of the population could read these inscriptions, but only a distinct minority of them could produce such things. When one considers the incredible and lengthy inscriptions in scriptum continuum in capital Greek letters in Apamea alone in eastern Turkey (see the pictures in this entry), placed prominently to be viewed from the road, it is hard to doubt that the assumption is that many passing by would stop to read these inscriptions, or else what’s the point?

One of the more interesting survey presentations was by Zsuzsa Varhelyi of Boston University entitled “The Graffiti Habit in the early Roman Empire”. She demonstrated that the inscriptional boom seems to have begun with the beginning of the Empire, which is to say under Augustus, and was carried on in a big way as part of the propaganda campaign throughout the era of the Empire.
R. Benefiel’s lecture ‘Advertising in Ancient Pompeii’ showed just how prevalent and brazen and specific the ads were for prostitutes (‘Read this inscription first if you want intercourse. Visit Attice’—an inscription at Porta Marina on a wall just off the docks at Pompeii in a prominent place just outside the city gate). But there were also plenty of advertisements for real estate, both for apartments in an insula (the ancient equivalent of a high rise apartment building (see CIL IV 138*—from which we get the word ‘insulated’), and also for high end real estate (‘the Praedia [property] of Julia Felix, a large bath complex available for rent’). N.B. there are huge collections of inscriptions in both Greek and Latin from all over the Greco-Roman world. CIL stands for Corpus Inscriptiones Latinae, the Latin inscriptions and there is also CIG and IG as well for the Greek ones. It is fascinating to read through a good deal of this material. We especially learn a lot about Greek and Roman theology about the afterlife, from the grave art and epitaphs and encomiums. We also learn a good deal of what was for sale, for example we find drawings of vases or amphora in a place where wine was for sale.
The most obvious graffiti were the political ads and ads for gladiatorial games, sometimes with letters 2-3 feet high painted in bright colors on a white washed wall. You could hardly miss them when walking the streets. The ads the sex trade however were of a more permanent and prevalent nature, incised into walls at strategic locations (see CIL IV 4441, 4699, 1383, 4700). There is a new helpful volume on this whole matter by Z. and L Newby, Art and Inscriptions in the Ancient World, published by Cambridge U. Press, 2007.

Another of the more fascinating lectures given in this seminar was that by B.W. Millis on “The Population of early Roman Corinth as seen through Graffiti”. What he argues is that Corinth was not by and large populated with retired Roman veterans, as has sometimes been argued but that even Roman Corinth was largely populated by Greeks, including Greek freedmen, as the onomastica (the names found in various contexts) suggest. Interestingly, by contrast with Pompeii, there has been almost no graffiti found in Corinth—one Latin inscription and a handful of 2nd-3rd century A.D. Greek ones. Millis discusses graffiti found on pottery such as the inscription on one which reads “it is the cup which belongs to Dionysius”. This may profitably be compared to the recent cause célèbre—the Alexandrian Jesus Cup which probably has nothing to do with the most famous Jesus, upon further review. This sort of graffiti was hand scratched onto a pottery item after firing to make a claim of ownership, and the letters were often crudely incised. In Corinth, of all the inscribed cups, less than 10% are inscribed in Latin. Now the official language of Paul’s Corinth for legal purposes was Latin, and the official inscriptions for many things were in Latin (though not for the ancient Isthmian games held nearby). Millis’ conclusion is plausible—the population of Paul’s Corinth were mainly Greeks, who could be ‘Roman’ in public, and there were the Romans, many of whom had chosen to be Greek in dress and in private. The Romans had long idolized and aped Greek culture, and it is not surprising that they would become Grecophiles if they lived in a city like Corinth long enough.

For Christians, the most important of the graffiti lectures was Roger Bagnall’s “New Graffiti from Smyrna in the Context of Early Christianity”. He concentrates on what was found in the basement of a basilica in the agora (a basilica being a public building, often a hall of justice in the ancient world. Its architectural pattern was taken over by the church and used as a design for churches later in antiquity). This agora, which I have visited in Izmir is enormous and the basilica in question was first excavated by Turks before WWII. The basilica collapsed in A.D. 178 due to an enormous earthquake, but was reconstructed later. The part of the basilica focused on by Bagnall comes from the late first and early second century A.D. and there is plaster or stucco that was all over these walls, and they had graffiti on them. The assortment of graffiti is considerable focusing on sex, love, civic pride, politics, and religion all jumbled together.
Most importantly, Bagnall believes he has found the earliest Christian palindrome or word square of sorts, like the ‘soter-rotas’ square of greater fame. In the middle of the square are the words LOGOS ONOMA—THE NAME OF THE WORD. This was found with some gematria below it with the words KYRIOS= 800 AND PISTIS=800 (i.e. a numerical value is assigned to each letter and then the word’s total is added up, as in 666=Neron Caesaris Divi Filii Augustus).

But perhaps the most interesting of the graffiti found by Bagnall reads ‘ό δεδωκως το πνεύμα’ ‘the one who has given the Spirit’ (namely the Kyrios—the Lord Jesus). Bagnall claims this is probably the earliest evidence of Christian graffiti. What was the function of this graffiti, inscribed as it was in a public place? Well it does not seem to have been mainly advertizing for outsiders, but rather advertizing for insiders, who knew the key clichés, phrases, and gematric numbers to make sense of the graffiti. Like a code for insiders it announced that there were Christians in the city, who could be found and worshiped with. The reason for code is obvious, if one has read either Rev. 2-3 or knows the early Christian history in Smyrna. Polycarp (A.D. 69-155) was one of the most famous early martyrs whose life spanned the end of the apostolic era unto the middle of the second century. He became a bishop in Smyrna, and as the legend goes, after a failed attempt to burn the saint at the stake, he was stabbed to death. Christianity before Constantine was categorized as a ‘superstitio’, and as such was subject to persecution, prosecution, and occasionally execution, as in the case of Polycarp. The finding of the Christian graffiti in Izmir can only be called very significant, as it confirms both the presence of Christians there early on, and their need to communicate in code. Graffiti is the type of evidence that we must look for when we are dealing with those who practiced a clandestined and not officially sanctioned religion. These lectures help us to understand both the character and the level of literacy in early Christianity. It was by no means only populated by ‘women, slaves, and minors’ (i.e. the illiterate) as was the polemic of Greco-Romans who encountered and despised early Christianity. To the contrary, even ordinary Christians left their mark, not through writing letters or Gospels, but through graffiti.

BW3
Posted by Ben Witherington at 7:01 AM

Is there somewhere online that gives a complete translation of the walls in Smyrna?

Not yet. Not to my knowledge. This is so new, the paint isn't even dry on this report.

"It was by no means only populated by ‘women, slaves, and minors’ (i.e. the illiterate) as was the polemic of Greco-Romans who encountered and despised early Christianity."

Thanks for your comments here. The most common slight given to Christianity (even today) is that the ranks of the early church were made up of the lowest classes and castes of society, those who were too stupid to see the superstition for what it was. It is important to realize that the church was one of the first societies that did not discriminate based on race, social status, or socio-economic level. (Well, the church in Corinth not withstanding...)

i will never think of graffiti in the same way again.

Do you know where one can go for further info on this fascinating subject? Or perhaps where one can get transcripts or similar from the lectures that you summarised?

The lectures will likely be published, some in JBL I expect, but they are too new to be available as of yet.