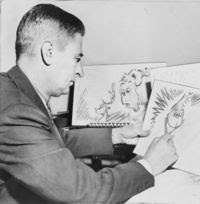 There are certainly not many G rated movies any more. When I was growing up, back at the dawn of time when the earth was still cooling, there were plenty of them, and the movie makers never wanted to get even an R rating. Pg 13 was as far as most dared push the envelope. One of the great pleasures of being a child in the 50s was that reading was actually emphasized as important, and was rewarded. Those Weekly Readers got you somewhere, and the library was a regular and popular destination for the young. Certainly some of the most popular books children enjoyed reading in that era, and later were the some 40 books of Theodor Seuss Geisel (1904-91). He was famous for his zany characters and his even more entertaining drawings of wild and woolly characters. He made the Disney characters look like Vanilla Ice Cream, and even the Looney Tunes Characters were outdone from time to time. It is all the more amazing that it took so long for some of his classic children's books to be made into movies. Of course his most famous books were 'The Cat in the Hat' (and its sequels) 'Green Eggs and Ham' and 'How The Grinch Stole Christmas'. One of the most creative aspects of his books were his clever rhymes. Indeed most of his books were rhymes from start to finish. I have no doubt that these books affected me early on and were one impetus propelling me into writing poetry that rhymed. Rhyming was made cool by Dr. Seuss.

But there was much more going on in Geisel's books than just entertaining rhymes and fascinating animal characters. Geisel had some interesting educational and philosophical messages to convey, and 'Horton Hears a Who' is a perfect illustration of this tendency.
What most will not know about Theodor Geisel is that his Dr. Seuss books came at the very end of a long and interesting career as a writer, political cartoonist, satirist, writing of documentaries and much more. Here is one summary of what happened in the early 50s to prompt the writing of these books, courtesy of Wikipedia---
----------------------

"At the same time, an important development occurred that influenced much of Seuss' later work. In May 1954, Life magazine published a report on illiteracy among school children, which concluded that children were not learning to read because their books were boring. Accordingly, Seuss' publisher made up a list of 400 words he felt were important and asked Dr. Seuss to cut the list to 250 words and write a book using only those words. Nine months later, Seuss, using 220 of the words given to him, completed The Cat in the Hat. This book was a tour de force—it retained the drawing style, verse rhythms, and all the imaginative power of Seuss' earlier works, but because of its simplified vocabulary could be read by beginning readers. A rumor exists,that in 1960, Bennett Cerf bet Dr. Seuss $50 that he couldn't write an entire book using only fifty words. The result was supposedly Green Eggs and Ham. The additional rumor that Cerf never paid Seuss the $50 has never been proven and is most likely untrue. These books achieved significant international success and remain very popular.

Dr. Seuss went on to write many other children's books, both in his new simplified-vocabulary manner (sold as "Beginner Books") and in his older, more elaborate style. In 1982 Dr. Seuss wrote "Hunches in Bunches". The Beginner Books were not easy for Seuss, and reportedly he labored for months crafting them."

With this background were in a bit better position to evaluate what Seuss accomplished. For one thing he was the champion of the little person, and this comes through so very clearly in 'Horton Hears a Who'. Even small people are people deserving of respect and love. This same book also reveals Seuss' satirizing of those who don't believe in anything bigger than themselves, or anything that they can't see or touch. Every chance he got, Seuss ridiculed cynicism, and championed the use of the imagination to create solutions in life. He had reason to believe in such things since he had to support his family through the Great Depression by his wits. He drew ads for General Electric, the Saturday Evening Post, Vanity Fair, Life Magazine, NBC, and even Standard Oil during that period of his life. He was a master of ridiculing those who took the fun, joy, and excitement, and sense of wonder out of life (see 'How the Grinch Stole Christmas').

So what should we think of the new movie, which very cautiously tells us it is an adaptation of Seuss' book? Adaption it is, since most of this movie (clocking in at 1 hour and 50 minutes) has no rhymes at all. Well on the positive side, Carol Burnett does a wonderful job as a buoyant but annoying kangaroo Mom who thinks her job is being the thought police for her jungle community. And both Steve Carrell (as the Mayor of Whoville) and Jim Carrey (as Horton) are effective in their voicings of the characters. And of course the animation is very good indeed, with the presentation of Whoville offering us the real flavor and color schema of Seuss' work. But something is missing.

This movie, unlike say 'Ratatouille' lacks creative spark, unlike Seuss' original book. It relies too much on motion and action and too little on the intellectual side of Seuss' work. The characters are likable enough, but they certainly do not capture the heart or imagination like other such films (say for example the 'Lion King', or the 'Emperor's New Groove'). As a holiday movie, its the best there is in the theaters just now, and is not likely to offend any one, but it is also unlikely to make many see the larger human values that Seuss sought to encode into his work, which is a pity. It would have been nice as well if there had been a better sound track for this film as well. All in all, I give this film a B- compared to the better work in its genre. Not bad, but it could have been much better.
------------------
Posted by Ben Witherington at 6:38 PM

There definitely aren't enough G movies any more. Now, I do enjoy many non G movies. But I have noticed this recently because my eldest son is 3, and perhaps ready for his first movie - but what should it be? Not that many movies appropriate for 3 year olds come out. I was wondering about this one, though my father (who teaches NT, btw) thinks it may be too strange. What do you think?

I think it is fine-- enjoy.

Just a little piece of trivia: the PG-13 rating was inspired by Indiana Jones and the Temple of Doom in 1984. The whole history is at http://en.wikipedia.org/wiki/Pg-13

As a father of a 2-year old, I suspect the decrease in G movie releases is largely in part to the abundance of video and DVD releases for kids, not to mention the Disney and Nickelodeon cable empires.

Kids are consuming greater amounts of media today. The difference is that parents don't have to watch it with them (which raises a whole different list of concerns).

Keep up the great work on this blog.

I saw "Horton Hears a Who" and enjoyed it. I think it could have been better. Have you had a chance to see "Seussical: The Musical"? Asbury's current senior class did a production of it when they were sophomores. I enjoyed Seussical more than "Horton Hears a Who".

I have often thought of Horton hears a who as a wonderful allegory for the abortion issue. I know that was not Dr. Suess' intention, but it works nonetheless!

Not only wasn't it Seuss' intention for "Horton" to be an anti-abortion allegory, but Seuss' widow gets rightly upset when people hijack his work for such political purposes.

This is completely off topic, but I am wondering if you may be able to help direct me to a book that compares or contrasts Catholic and Protestant theologies. I am looking for something that in one volume will help me better understand the agreements and differences of the two faiths.

I just got back from taking my 3 kids (elementary age), who are on spring break. Afterwards, we had ice cream and we talked about the theological analogies found throughout. Good flick. Good fun. Good teaching tool.

b-w,
I'm not sure she gets "rightly" upset but she sure gets upset. Have to agree with you hollands opus that the story is a pretty good allegory for abortion.

Haven't seen the movie but the preview was interesting.

b-w
hijack seems a very harsh word for finding a fun argument for personhood in Dr. Suess' "Horton" hears a who. Indeed, a who is a who no matter how small. Neither is it a political purpose - it is a profound philosophical argument and all due respect to Mrs. Suess, I will continue to use it in the way that I have chosen to, for no one has a monopoly on cute ideas, and borrowing such things for illustration with the necessary caveats is a common literary device.

Desensitizing. Real-life is way down, Reality-tv is way up. Entertainment is still about substance, but how we define substance seems to have changed.

Besides, aren't we only a couple short years from real-life "The Running Man" and death-duels in the Coliseum? :)

Back when we would get our weekly reader and read it as part of school, we also went to sat. afternoon matinee's to watch cartoons and got up early on sat. morning to watch cartoons right after the farm report.
That's why Horton .... is so enjoyable. We can just be entertained and relax.

hollands opus and others,

"Hijack" is Ms. Geisel's word, not mine. And since it wasn't his intention, and indeed he'd probably be horrified that people are using his words in this way, I agree with her completely. It's improper to take this children's story and turn it into an anti-abortion allegory. This practice should be stopped out of respect for the author's widow's wishe.

B-W
By that same reckoning, I would have to abandon my practice of pointing to Mt. Rushmore as an example of intelligent design, if indeed the sculptor were to take offense at my making a statement that he had no intention of making about creation-all he was trying to do after all is honor the presidents! There is no need at all to honor Mrs. Geisel's request, as the request is emotional only and not at all rational.

Did you really site wikipedia?

Dr. Seuss' Horton Hears a Who is classic, i forgot how much that guy packed into such simple storylines... they didn't add much to the original story either except for the usual Jim-Carryisms.