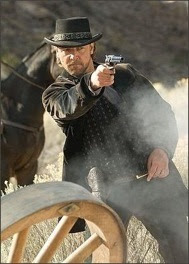 I must confess to being a Russell Crowe and a Christian Bale fan, as actors at least. I must also admit to loving well done westerns, and this is one. But on the other hand, most do overs turn out to be less good than the original, especially if it was a classic. As for the 1957 version of '3:10 to Yuma' I personally would not describe it as a classic. It was not in the category of 'High Noon' or even 'Gunfight at the O.K. Corral'. The story was suspensful then and it is in the remake, but the difference is severalfold: 1) Crowe and Bale are better actors than those in the original; 2) the supporting case is better; and 3) the cinematography is much better, not surprisingly since there are now HD cameras.

Unlike so many movies of late, this one is svelt. There is no lard, no filler, no marking of time, just 2 hours (actually a few minutes less) of pure drama. There is also no CG so far as I can tell, and no need for it either. The producers are to be commended for resisting the temptation to rely on the celestial technology now available. Westerns don't much need such bells and whistles. The actors also do their own stunts. The movie is old fashioned in many ways, and is all the better for it.

Perhaps a few reflection on the genre of Westerns is in order at this point. Lest we think the genre has died out altogether I would remind us all of recent excellent movies like 'Open Range' with Robert Duvall, perhaps the all time best cowboy either on TV or on the big screen. Who will ever forget his performance in that runaway smash series 'Lonesome Dove' with Tommy Lee Jones and a cast of thousands. But clearly enough Westerns have long since passed their heyday, the apex being in the 50s or early 60s, even on TV (remember 'Bonanza' or 'Shane' etc. ?). Why have Westerns faded into an also ran genre (and why exactly is '3:10 to Yuma' not showing in more first run theaters)? One suggestion is that we now live fully in the age of technology, the age of Star Trek and Star Wars. Kids don't want cowboy outfits and holsters and guns any more. They want light sabres, or more to the point sci fi X box games. Another reason surely is that the day that we believed in the triumph of rugged individualists who could ride into town and solve all our problems by rendering a sort of rough justice (remember the Clint Eastwood westerns?) is probably over. Disillusionment sets in after intractable quagmires like the war in Vietnam, now followed by the war in Iraq. There is no silver bullet and no lone ranger that could solve those sorts of problems.

Whatever the reasons for our lack of love for westerns these days, this movie has one feature that makes it especially interesting to Christians, and it is a regular feature of the western genre, and that is the presence and influence of the Bible, and in general Biblical ideas and religion, despite the toughness and roughness of life on the ole frontier. In '3:10 to Yuma' we have the nice juxtaposition of a villain, who is a somewhat likeable rogue, spouting one quote after another from the Bible. He is particularly fond of Proverbs. I am referring to the character Crowe plays-- big bad Ben Wade. He is also given to artistic expression in the form of doing pencil sketches. He is also a stone cold killer. Westerns of this ilk raise the very good question of how the Bible can be so omnipresent and yet seem to have so little impact on the behavior of those who keep quoting it fervently.

I will not spoil the plot of the movie which has all the classic elements of a good western drama but I will say this. Like in so many westerns, this is a story about the gaining of respect, and the redemption of a man's honor which had been besmirched by the vicissitudes of life and his failure to respond to them bravely and in good faith. So many westerns are about that sort of self-redemption. They are also about family values, interestingly enough

So go see this western if you have a chance, and see what all the critics are raving about, and in the process learn the winning ways of westerns, even if their rarity shows how westerns have lost most of their audience. For another excellent review of this movie see my colleague Lawson Stone's review at his website.

Of course, you can combine Star Trek with a western, as was done with Spectre of the Gun.

I like westerns too, though I haven't watched them for a while.

Indeed, the 'Serenity' series was a terrific combo of western with sci fi.

It should be noted that the original 3 Star Wars films were often described as westerns set in space.

I'm one 23 year old with a fondness for westerns, though. They're definitely worth catching on the big screen as most smaller tvs make it hard to catch the wide-open spaces of the West. 3:10 to Yuma was definitely worth going to see.

I love westerns. I thought that Open Range was a great movie as was "The Missing". I will put this one on my to watch list.

I'm a new student at Asbury, and I have a question that is totally unrelated to your blog.

Have you heard of the eschatological views called "partial preterism" and "full preterism?" If so, I was wondering what you thought of their hermeneutic (the idea that either most, or all of the prophecy in the NT has already been fulfilled - including the second coming of Christ for full preterists).

Full preterism is especially unorthodox because it does not agree with the ecumenical creeds about the second coming. I have a friend who has been flirting with preterism because he finds their "time" arguments persuasive - that is, that the first century church (and the NT) seems to believe that Jesus would come in their lifetime.

Well hi Kyle. Next time shoot me an email with this sort of question. Partial preterism is of course correct. Many of the prophecies, both OT and NT were fulfilled a long time ago. But full preterism is false. There are still various things yet to happen, the chief of which is the return of Christ and the events that return will trigger. The notion that the earliest Christians set a date for the return of Christ within their own lifetimes is also false. Many thought it was possible, but unlike modern false prophets there was no prediction of a specific date or time or year etc.

the day that we believed in the triumph of rugged individualists who could ride into town and solve all our problems by rendering a sort of rough justice ... is probably over.

Yes, but only a couple of years ago when you guys stopped believing George W could solve all the problems of Iraq like that.

Don't look at me, I didn't support any of that stuff from the first. I knew it was a recipe for disaster and the death of many Americans, unnecessarily.

You know, one other thing I like about Westerns is that they remind me of a lot of Old Testament stories. Genesis and Judges kind of have that same sort of frontier feel. Not a lot of law and order, just people trying to sort things out between themselves, with often violent results. My favorite western - Unforgiven.

I always thought the HBO show "Deadwood" reminded me of the Book of Judges...both are set up around the same theme: how society organizes itself in the absence of law and authority. Both the show and Judges tend to be crude, violent, harsh pictures of humanity at it's worst when "there is no king, and men do what is best in their own eyes".

I thought the the performances in 3:10 were amazing. The story, well, the last 10 minutes of the story, fell apart for me. Crowe and Bale turned in two of the best performances though that have been on the screen in a very long time.

Hi Brian:
I agree. Why in the world would Wade run through a hail of bullets with his captor for no good reason--- weird.

But it was still a fine movie.

1) Because he wasn't his captor anymore.

2) MY question was how in the world Dan ran through that obstacle course so fast with a mid-1800s wooden foot!


I agree. Why in the world would Wade run through a hail of bullets with his captor for no good reason--- weird.

Well, the way I see it, he had come to respect and even admire Dan for his immense courage and integrity and for his dedication to his family. Not just financially, but also making sure he set a good example for his son - I think a major reason why Dan didn't take the money from Ben was because if he did, his son would see that and would look to outlaws as role models more than he already did.

Ben is going to escape anyway - his mention of escaping before and the whistling for the horse imply this. Throughout the movie it seems that he somewhat regrets his life. Although he may not really reform himself after he escapes from Yuma again (that's left open to interpretation), I think that he felt he could redeem himself somewhat by helping Dan and his family.

I'm a big fan of Firefly/Serenity too.

Russell Crowe has been in the news here in Sydney in a good way http://news.ninemsn.com.au/article.aspx?id=77733. Our state has, I believe the world's largest concentration of these accursed machines.

ok the movie was cool,but i got realy disappointed at the end, stupid end realy, not tellng what happens and ruining for you, but if you like happy endings watch something else