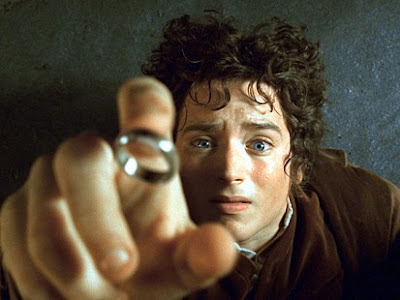 It appears after all that Frodo didn't quite manage to throw the ring all the way into the fires of Mordor. It's lure must still be plaguing Middle Earth. The latest evidence that the lure of the ring is still in our midst is that the Tolkien heirs are suing New Line Cinema for a cool 150 million dollars. It is reported that the three movies all in all made some 6 billion dollars world wide! In the NY Times article by Michael Cieply we hear that:

"The Tolkien suit may prove to be especially troublesome for New Line, if only because it has the earmarks of a public relations nightmare. The plaintiffs include a charitable trust that is overseen by family members of the author, who died in 1973, and includes among its beneficiaries worthy organizations like the Darfur Appeal and the World Cancer Research Foundation.

In a complaint filed on Monday in the Los Angeles Superior Court, the trustees and others say they have never received a penny from a 39-year-old agreement that they say promises 7.5 percent of the gross revenue from any films based on Tolkien’s famous novels. New Line, whose spokeswoman declined to comment on the suit, is accused, among other things, of defrauding the Tolkiens by improperly deducting more than $100 million per film in payments to the Zaentz company and Miramax from the pool from which the trust and others would be paid."

Now it must be said that the Tolkien heirs, being proper British folk, waited a long time to see if New Line Cinema would do what it was obligated to do. The first movie after all came out in 2001. There have been various nasty lawsuits including the one recently settled by Peter Jackson with the Cinema company in question. This last suit seems to have cleared the air and the way for Jackson to get on with filming 'the Hobbit' (yeah). The Tolkiens themselves were leery of the films, and some boycotted the premieres. At this point however they seem to be concerned that their charitable trust, which does good work in Darfur be properly payed its share of the loot. The Golum figure in all this clutching the ring and yelling 'its my precious' is not the Tolkiens, it would seem but rather the Cinema Company which made a fortune not just off the films but from the spin offs as well which is a major part of the bone of contention.

Stay tuned for future episodes when we will no doubt hear about Gandalf the wizard lawyer who unties the gordian knot of the problem and returns the ring to its rightful owner, to thoroughly mix my metaphors.
Posted by Ben Witherington at 1:02 PM

I've been remiss and off the blog circuit for a while. Glad to be back reading your stuff.

Oh wow! I do hope these events don't mess up the filming of 'The Hobbit'. However, it does seem curious that the Tolkien family waited so long to pursue anything. That is, of course, unless private negotiations with the movie studio broke down. I believe they should surely share in the proceeds to the full extent of any prior agreement. Hey, without their relative's creativeness, said movies would never have been created.