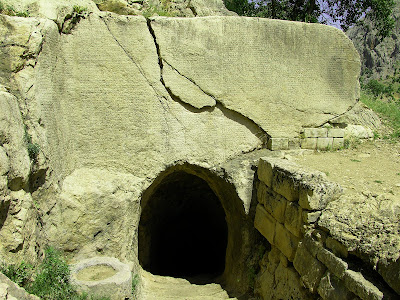 Arsemea was a once proud city in the kingdom of Comagene, now in Eastern Turkey. Set way up on a hill, and just on the backside of Mt. Nimrud, it overlooked a rich fertile river valley. Here Mithridates I, the other famous king of this kingdom (besides Antiochus I whom we have spoken of before) set up mounments and monumental inscriptions to himself, setting himself in the company of the demi-god Herakles (=Hercules) just as Antiochus had done. And at Arsemeia there appears to be a tomb, going all the way down to Hades which Mithridates may well have been buried in at one point. The entrance to the portal to Hades is seen above, and the steps leading way down into the earth can be seen below, except that the picture should be a quarter turn to the right. Mark Fairchild, who took some of these pictures went clambering down these slippery steps into Hades for yet more pictures--- not me. What he found was stairs which went down a huge way underground-- oh yes and some spiders etc. Me personally I didn't have a death wish, nor a desire to commune with the shades in Hades just yet. 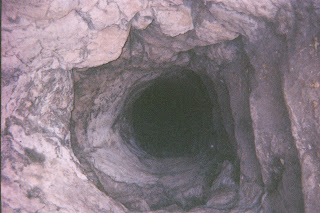 The picture you see below shows a portion of the longest Greek inscription to be found in Turkey and perhaps anywhere. The Greek is good Hellenistic Greek all in capital letters with seldom any separation of words, lines, sentences etc. This of course is also how our Greek NT was written originally on papyri (no the chapters and verses are not inspired--- they came later in the Middle Ages). 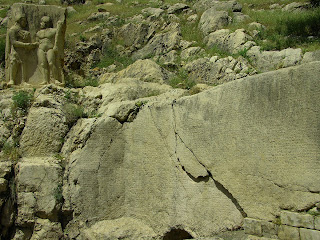 The picture below shows me sitting between Mithridates and Herakles, who presumably is welcoming Mithridates into the afterlife. It appears Mithridates is way over dressed for the occasion and venue. It also appears that Herakles is suggestion that perhaps some caber tossing might be in the offing. 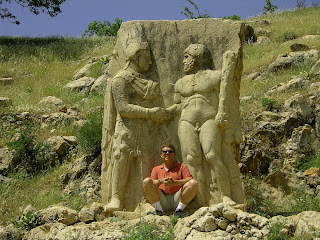 On a different portion of the hill is another statue, which is hard to identify. You will find it below in two different pictures. This could be a statue to Mithridates Queen, but it is hard to tell. Notice she has her party hat on and is carrying a scroll-- a sign of literacy, which would be rare amongst women in that age, indeed rate amongst anyone (about 10% of the populus could read and write). 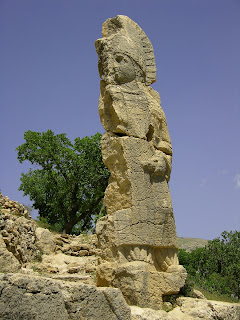 Here below is another monumental inscription on both sides of a stone again in good Hellenistic, if Asiatic Greek. It was common to set up honor columns to oneself in that society, bragging on what one accomplished, or was alleged to have accomplished. 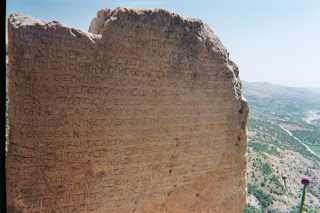 What do we learn from such ruins? I am always struck by the degree and level of advanced civilization in these ancient cultures. We think we are so smart, but when it comes to building things, they sure knew how to do a better job of building things to last than we do. We could learn a lot from their craftsmen and artisans and inscribers. I am always also structure by how even mighty kingdoms rise and fall in history. We should not assume we in America are exempt. By any standards the USA is a very new and young country with a very short history. We have no idea how long it will last. When you think of Egypt being a country with over 5,000 years of recorded history as a nation or people group this makes you realize we are the new kids on the block, to say the least.

Another thing you learn about the ancients is that they are tremendously religious people. They don't make important decisions without consulting the divine in one way or another. They think a lot about the afterlife what legacy they want to leave behind on the earth. We would do well to have that degree of concern and seriousness about legacy and the afterlife. Most fundamentally the ancients believed that older was was wiser, was more learned, was better, was more likely to know the truth. An old religion, tried and true, was much more likely to give one the right answers than a new one. These folks didn't make our mistakes, for we tend to assume the new is true, and the latest is the greatest. The reason Josephus wrote a history of the Jews called Antiquities, is because he wanted to show how old and long established his people and their religion was. Ancient peoples did not idolize youth and the accomplishments of the young the way we do, or at least they did not idolize them more than they did the elder in society who was wise and had learned from life and schooling and experience.

One of the constant mistakes Americans make in regard to the Middle East today is not understanding that politics always is involved with religion in that part of the world, and always has been. America is the peculiar people who seem to have assumed politics and religion could be separated. And we have paid the price in Iraq and elsewhere for ignoring the religious roots of dissention, debate, violence, society and so on. These are the sort of things I learn from such explorations of such sites, always bearing in mind the famous aphorism-- 'those who fail to learn from the past, are doomed to repeat it'. 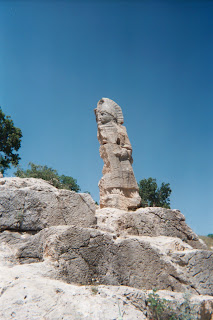 Posted by Ben Witherington at 12:29 PM

I hear that some befuddled man call u early in the morning. I thnink hi s name my be Bance Biller. I happen to know this guy somewhat and am wondering if u'd be albe to meet w/ me sometime soon and discuss this issue/man alongside this current rise in political "Honesty" and "openness". The political world is surely changing,but i'm not so sure that it's doing it for the best. THE besassat seems to moving his head up upon the surface.

Dear Ben (or Dr. Witheringon - which do you prefer?),

This series of posts is really fascinating. How long is your current trip, and what other places are you expecting to visit?

I love your comments about the importance of knowing and learning from history. I have often wondered why the US feels it can solve the problems in the Middle East, especially since they are conflicts that go back a very long time, and are tied to religion. I don't know that there will ever be peace in that region until Jesus returns!

I have recently been reading/listening to a lot of material by both Leonard Sweet and Robert Webber - two very insightful men who have helped us understand the future of the church, and what is happening in postmodern culture. It recently occurred to me that both of them are probably so insightful about the present and future because they have done extensive study in church history. How important is the study of history to us if we really want to have understanding?

One more question that is unrelated... I have really appreciated all your writings. You have an amazing amount of "output." Can you give us some insight into your writing routine--i.e. do you write for an hour or two a day, etc.? How do you manage to produce so much material, especially when it's research-based?

Thanks for the blog - it's great!

I too like the work of Sweet and Webber and you are exactly right that they have insight into the future because they have been good students of the past.

As for my writing, during the summer I don't do much writing. I am on the road more. I always write at home, and do so with whatever spare time I have. God gave me a gift of writing a long time ago, and a mind that won't rest until a certain amount of things get out of my brain and on to paper. I set a goal a very long time ago to try and write a good commentary on every book of the NT. That goal is not far off. When I get a good idea for a monograph, then I take time to do that. My recent series of three small books, one on baptism, one on the Lord's Supper, one on the Word of God (the latter two will be out in the next year) is an example. Writing is not a chore for me, it is a joy.

Here are a few keys to good writing: 1) reading good or great literature. Your style is in part a product of what you read and absorb; 2) learning how to write clearly without comprising the complexities of issues; 3) practice, practice, practice.

I really appreciate your comments about the youth of American society. Another author, Orson Scott Card, recently made a similar point in the fictional realm, in a book called Empire. His ironic point is that the United States is often castigated for being like Rome, and it is often shouted to anyone who will listen that if the USA doesn't change, it will fall like Rome. All this is hard to support, because the United States is not very much like Rome. Rome dominated its world for 500 years BEFORE its fall, and its social structures dominated European society for another millenium AFTER its fall. Conquered peoples clung to Roman ways long after Rome herself was dead; if the US ran out of guns and cash, our wasteful and arrogant style of living would be shed in a generation or two.

Another point you made that I appreciated was about the ancients respecting age. I think that had something to do with why primitive Christianity clung to the Hebrew Scriptures and used them extensively even in Gentile settings; these were OLD writings and worthy of honor, study, and emulation.

BTW, the female statue with the "party hat" and the scroll is Athena (Roman: Diana), goddess of learning!