'Through Christ-- the Magus' 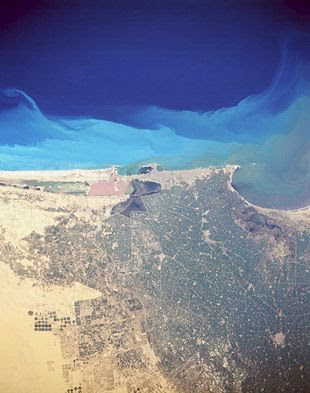 Here is an interesting news item about what appears to be an incantation bowl found in Alexandria harbor. I doubt this item could possibly date earlier than the mid to late first century, for Christianity as we know it seems to have come to Alexandria in mid-century (e.g. consider the case of Apollos of Alexandria, one of the great early rhetoricians in early Christianity and possibly the author of Hebrews). Below you will find the initial news release which appeared on the BAR website, following which I provide some analysis.
------------------

Possible Earliest Known Reference to Christ Discovered in Alexandria’s Ancient Harbor
October 5, 2008
A group of scientists have announced that they have identified what may be the earliest known reference to Christ. A marine archaeology team working in the underwater ruins of Alexandria’s ancient harbor recovered a bowl that dates from the late 2nd century B.C. to the 1st century A.D. The bowl is inscribed with the Greek words “DIA CHRSTOU O GOISTAIS,” which some scholars have interpreted to mean “by Christ the magician” or “the magician by Christ.” Dr. Franck Goddio, co-founder of the Oxford Center of Maritime Archaeology and the leader of the scientific team responsible for the recovery and study of the bowl, believes that the object could have been used by a “magus”—a magician—in the practice of fortune-telling rituals. “It could very well be a reference to Jesus Christ, in that he was once the primary exponent of white magic,” says Goddio.


Alexandria was one of the elite educational centers in all the Roman empire. It was also one of the place where one sees the confluence of many different cultures-- Greek, Roman, Jewish, Egyptian, and then Christian. One of the features of this mixed-cultural milieu was the mixing and syncretizing of various religious world views. It is thus not surprising that we appear to have now found an incantation bowl in the harbor where this city used to be which appears to have an inscription about Christ. As was the case when you have new converts from other world-views, these converts often brought various of their religious views and understandings into the new religion. Thus for example, if Jesus was known to be an exorcist and healer of various sorts, the assumption in the Greco-Roman world would be that he was likely some kind of a magician. How do magicians differ from healers or Jewish exorcists? Magicians tend to believe that certain kinds of incantations or ritual processes can produce certain kinds of spiritual results--- blessings, curses, healings and so on. There is very clear evidence from the second century A.D. and later that various religious groups tried to draw on Christ's healing powers by offering incantations or ritual recipes and recitations to produce a certain outcome. Magic, like divination is a bottom up process, by which I mean it is a human attempt to manipulate the divine. This would be the opposite of prayer which relies on, and trusts God, to do the right and helpful thing in a situation but the prayer knows that God's arm cannot be twisted, however careful the ritual process or incantation. No one can make God an offer he can't refuse, and therefore from a Judaeo-Christian point of view magic is the opposite of trusting God, and leaving the results of prayer in God's hands. Magic is the attempt to force the issue, force a certain outcome.

The term on the bowl, as reported in the news is however not magus, magi, which is indeed the Greek word from which we get the term magician. We find it in the Gospels applied to the 'wise men' who visited Jesus, who appear to have been astrologers. Goistas/ Goistais is however a different, though possibly related, word and in any case it is not clear from the Greek construction here that Jesus is being called a magician. My reading of the inscription is that the first phrase requires the translation "THROUGH CHRIST". That is Christ is the agent, not the actor here. The actor would be 'Ho Goistais' whatever precise nuance one wants to give this term. The whole phrase then may refer to a diviner or magician who used Christ or the name of Christ in his incantation-- he worked 'through Christ'. The rendering suggested in the news release, whilst more sensational seems less probable to me.

In any case, the real import of this bowl is for those tiny minority of folks out there who are arguing Jesus didn't exist and that there is no evidence outside Christian texts that he did. This is of course false-- we have Tacitus, we have Suetonius, we probably have Josephus, we have numerous inscriptions from the first and second century, we have old traditions in the Talmud which go back to the first century, we have the James ossuary, and we could go on.

What makes this incantation bowl piece of evidence especially interesting is that it shows that Jesus was so famous and well known as an exorcist or healer that even non-Christians or syncretists tried to gain acces to his power. This comports nicely with what we find for instance in a text like Acts 8 which tells us of Simon 'the Magus' who wanted access to this Jesus power through Peter, and it may even be relevant to that obscure text in the Gospels which tells of unknown exorcists using the name of Jesus to produce cures, which the disciples don't like and want to put a stop to, but Jesus objects (Mk. 9.38).
Posted by Ben Witherington at 1:13 PM

There are many scholars who now believe that the James Ossuary is a forgery, especially the "brother of Jesus" part of the inscription. Do you still think this inscription is authentic?

I certainly do think it is genuine, and so far as I can tell, you are wrong. There aren't many if any scholars who have recently made up or changed their minds and now see it as a forgery. Indeed, the recent examination of the box by several scholars has produced the opposite verdict.

I have a page on this artifact on my TC forum, with relevant discussion on various lists:

It seems pretty clear to me that this has nothing to do with Jesus.

This might be a complete different topic, but (as a side note):

What do you think of the dangers of magic thinking is specific christian practises like "anointing with oil" and "laying on of hands" (and maybe others)?