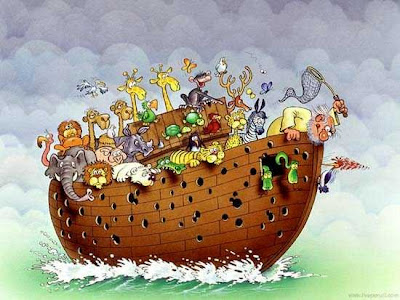 The following was sent to me by my dear old Mom. The claim is this came from actual Sunday school classes, but I'm suspicious since it involves the mythical little Johnny.
-----------

A Sunday school teacher asked, "Johnny, do you think Noah did a lot of
fishing when he was on the ?
"No," replied Johnny. "How could he, with just two worms."

A Sunday school teacher said to her children, "We have been learning how
powerful kings and queens were in Bible times. But, there is a higher power.
Can anybody tell me what it is?"

One child blurted out, "Aces!"

Nine-year-old Joey, was asked by his mother what he had learned in Sunday
school. "Well, Mom, our teacher told us how God sent Moses behind enemy
lines on a rescue mission to lead the Israelites out of . When he
got to the , he had his army build a pontoon bridge
and all the people walked across safely. Then, he radioed
headquarters for reinforcements.

They sent bombers to blow up the bridge and all the Israelites were
saved."

"Now, Joey, is that really what your teacher taught you?"
his mother asked. "Well, no, Mom. But, if I told it the way the teacher
did, you'd never believe it!"

THE LORD IS MY SHEPHERD:

A Sunday School teacher decided to have her young class memorize one of the
most quoted passages in the Bible; Psalm 23. She gave the youngsters a month to
learn the verse. Little Rick was excited about the task, but, he just couldn't
remember the Psalm. After much practice, he could barely get past the first line.
On the day that the kids were scheduled to recite Psalm 23 in front of the congregation,
Ricky was so nervous. When it was his turn, he stepped up to the microphone and said proudly,
"The Lord is my Shepherd, and that's all I need to know."
--------------

The preacher's 5 year-old daughter noticed that her father always paused and
bowed his head, for a moment, before starting his sermon. One day, she asked
him why. "Well, Honey," he began, proud that his daughter was so
observant to of his messages, "I'm asking the Lord to help me preach a good sermon."
"How come He doesn't do it?" she asked.

A rabbi said to a precocious six-year-old boy, "So your mother says your
prayers for you each night? Very commendable. What does she say?"The
little boy replied, "Thank God he's in bed!"

During the minister's prayer, one Sunday, there was a loud whistle from one of
the back pews. 's mother was horrified.
She pinched him into silence and, after church, asked, " ,
whatever made you do such a thing ?" answered, soberly, "I asked God to teach me to
whistle, And He just then did!"
-----------------

One particular four-year old prayed, "And forgive us our 'trash baskets'
as we forgive those who put trash in our baskets."
------------

When my daughter, Kelli, was 3, she and my son, Cody, would say their nightly
prayers, together.

As most children do, we have to bless every family member, every friend,and
every animal (current and past).For several weeks, after we had finished the
nightly prayer, Kelli would say, "And all girls."
As this soon became part of her nightly routine,
to include this at the end, my curiosity got the best of me and I asked her,
"Kelli, why do you always add the part about all girls?
"Her response, "Because we always finish our prayers by saying
'All Men'!"
-------------

Little Johnny and his family were having Sunday dinner at his Grandmother's
house. Everyone was seated around the table as the food was being served. When
little Johnny received his plate, he started eating right away."Johnny
wait until we say our prayer.""I don't have to," The boy
replied."Of course, you do," his mother insisted. "We say a
prayer, before eating,at our house."

That's our house," Johnny explained. "But this is Grandma's house and
she knows how to cook."
Posted by Ben Witherington at 6:42 PM

I wonder how many of these are actually true...

I enjoyed these. Thanks for the grin!

Johnny isn't mythical. I have him in every church I have served.

This is the funniest thing I have read in a long time. Thank you for sharing this wonderful post with us. I enjoy your posts and blog. It is one of my faves. Keep up the great work you do.

On another note: I would love to have you and your readers visit my blog to encourage and pray for a couple who is going through the hardest times I have ever heard of yet. Please.........I greatly appreciate it and I know it will make a difference in this situation.

Ben, God bless you and your ministry in powerful way brother.
I hope you have a blessed week.

In Him,
Kinney Mabry
Aka,
Preacherman!

Sorry this comment doesn't have anything to do with this particular post of yours, but I just ordered a book called "Through a Glass Darkly: The U.S. Holocaust in Central America" by Thomas Melville, who was a catholic priest for several decades until he passed away about a decade ago. Anyways, have you read this book and if so did you like it? If not, I would highly suggest it as the topic is something that gets almost no attention and yet is horrible in its scope. It would be really nice to get an entire post on the subject!

God: Where is Abel thy brother?

Cain: I know not: Am I my brother's keeper?

God: What have you done? The voice of your brother's blood cries to me from the ground.

Anyways, would love your comment and also would like to say I just stumbled on your blog today and think it's terrific. Keep up the good work!

My parents told me that as a child I was in church watching some guest preacher speak. He talked about how he was Baptizing (immersion) a larger man, while tipping the guy back the preacher lost control and the newly converted man fell back and hit his head on the edge.
This is when I come into the story, I yelled "well he should have worn a helmet!"
There is no Biblical pun, but it is funny realizing how children, even your younger self, will say anything.

Ben,
I love your blog brother.
It is one of my favorites.
You are such a blessing to my life as well as other readers. I enjoy this post and your entire blog brother. I have added it to my favorites and look forward to reading more and more everyday. You strengthen my faith and help challenge my faith and I love that about your blog. I pray for you every day that God will bless you, your family and ministry in a powerful way. I pray that all of his richest blessing fall on you brother.

I was wondering if you and your readers could take a few minutes of your time and leave an encouraging not to a family who is suffering greatly right now. Please...You can make a difference in an entire family.

In Him,
Kinney Mabry
Aka,
Preacherman! :-)

Ben please stop by my blog and pray for this family in need. They are suffering more than you will ever know. You can make a difference brother. So take just a few minutes of your time and stop by and leave an encouraging comment and pray for them in the name of Jesus it would mean so much brother!
Please......

Ben, if you want some truly hilarious and insightful thoughts about Christianity, you will love this blog: http://stufffchristianslike.blogspot.com/

This guy has an amazing gift for humor and thinking outside the box.