The Odyssey and the Iliad-- Riding the Orient Express 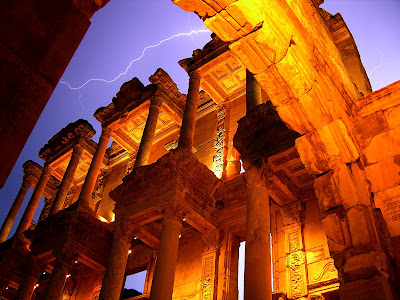 When I was growing up I used to love to read both Marvel Comics and Mad Magazine. They were a source of no little enjoyment and fun. I remember a particular edition of Mad Magazine where they parodied the Odyssey and the Iliad. Alfred E. Newman went through a journey called 'The Oddity and the Idiot'. You can imagine that Greek literary purists were not best pleased.

Well I am about to embark on something of an odyssey, and you may well think I am an idiot to do it--- so naturally I am soliciting your prayers here and now. It may be true that "fools rush in where angels fear to tred", but when you are a called person in the Wesleyan tradition, you do tend to see things from the perspective of John Wesley, who famously said "the world is my parish".
On May 7th I leave for the land of OZ also known as Down Under, and Australia. I don't arrive until May 9th, since I am crossing the international date line, and I must go thru Atlanta, Honolulu, Auckland NZ, and finally Sydney. I will be there until May 16th teaching and preaching at Morling College and at Macquarrie University. On May 16th I leave for Indonesia, where I will do a conference for ministers and laity on the canonical and extra canonical Gospels, and various recent claims about the Jesus tomb, the James ossuary, the Da Vinci Code, the Gospel of Judas etc. Unfortunately a prominent press in Indonesian has translated various of these sensationalistic books into Indonesian and it has caused no little stir. Being the fire chief's grandson, I am called upon to go in and put out the fire. This part of the journey requires some extra prayers as you will no doubt be familiar with the tensions between Moslems and Christians there, leading to persecution and the occasional martyrdom.

On May 20th I move on to Singapore to preach and teach at the Aldersgate Methodist Annual Conference and I am there until May 25th. The good news is, they have a Starbucks near my hotel :) From Singapore I go to Izmir in Turkey, via Istanbul. I will be lecturing at the Ephesos meeting once again (see the picture above taken by Mark Fairchild at the last Ephesos meeting in May 2007). I will have a little down time, and plan to go with Mark to visit Iznik, Turkey. Iznik is in fact the Turkish name for the city of Nicea, home of the famous council which produced the equally famous Nicean Creed. Iznik however is also the home of something else famous-- namely Iznik tiles. If you know anything about artful and decorative tiles, you probably have heard of Blue Delft tiles. Well they in fact are the European equivalent (and imitation of) Iznik blue and white tiles.
On June 1, I move on to Moscow to be with my former student and friends the Tsutserovs, where I will be teaching NT Christology at Moscow Evangelical Seminary until June 9th. This will be followed by a flight to NY and then Raleigh N.C. where I will be picked up and taken to my own annual conference meeting in Greenville N.C. (home of real barbecue--- WOO HOO!) where I will be teaching and preaching until June 13th, when finally I get to come home.
There are many combinations and permutations of travel and events involved in all this travel through the Orient and back West again and I would be very grateful if you all would pray for 1) safety and traveling mercies; 2) my health so I can accomplish what the Lord would have of me, I need to be able to sleep well in these various places; 3) most importantly that the Holy Spirit will use me to accomplish what is needed and what the Lord desires. I will certainly be blogging about this and bringing home pictures as well. But in the meantime--- the Lord bless you and keep you and make his face to shine upon you. BW3
Posted by Ben Witherington at 5:46 AM

The Reverend of Rock and Roll said...

Godspeed, BW3....May you be kept safe on your journey.

And may you find time to read some comic books on your way.

Around the world in just 40 days! Have a good trip.

Unfortunately a prominent press in Indonesian has translated various of these sensationalistic books into Indonesian and it has caused no little stir.

Having lived in and among Indonesian people, I think this is a really fortunate thing for you. You will have an informed and interested audience, if among a misinformed and interested public. (Comic books, Mad Magazine, Murder on the Orient Express, the Iliad and the Odyssey, and even the Wizard of Oz were--believe it or not--all part of my childhood, in Southeast Asia as an MK. This post warmed me with nostalgia, and with anticipation for you. Go to Starbucks in Singapore if you really have to, but get some true Java coffee from a street corner vendor one day too. And so we'll pray for you.)

Its more than a pity you are not speaking in Auckland, that would have been outstanding... mind you, those Godless Aussies probably need it more than we do :)

Ten more sleeps till you preach at my church - Narwee Baptist. Very excited to hear and meet you after enjoying your books and checking your blog each day. Will pray for you.

Ben, if you don't get a "real barbecue" in Sydney, I will be ashamed of my countrymen. Will there be any public meetings there, or is it all at the university?

Lisa, I will look forward to meeting you at Narwee. I trust someone will come get me Sunday morning and take me there. Mal you are welcome to come to the sessions at Morling. There is a registration fee if you want credit, and we start a week from Monday. Also the lectures at Maquarrie are public I believe. Contact person is Alanna Nobbs.

Hope you enjoy your time down under in our fine nation!

Make sure you take some time out to see the sights... and watch out for drop bears...

I would love to echo Geoff, it would have been brilliant if you were able to do some talks in Auckland...oh well hopefully next time you're heading this way.

Blesings of all sort on the trip!.

Don't worry about Indonesia! God is so gracious with the people, the land (and the water) though conflict between Christians and Muslims exists. I am invited to attend your lecture on the 17th of May, unfortunately I will not be able to come because of teaching schedule in different city. My name is Ery Prasadja. I teach biblical theology at Indonesia Theological Institute (INTI). I have been following your blog since 2006. I do have some of your books. I enjoy reading your posts and books. Thanks!

Just a brief update to say that all is well in Sydney and I am preaching and lecturing away here, with all my friendly Aussie folks in attendance. And Happy Mum's day to one and all,

Hi Ben,
Today I attended your lecture here in Jakarta, and I must say I'm very glad to be able to meet you in person after years just reading your blogs and books. I wrote something in my blog about it but it's in Bahasa Indonesia. http://paultuanakotta.blogpsot.com

Dear Dr.Ben,
I attended your talks in Singapore and had a hilarious time. I hope you were not too disappointed at the 'dispensational' camp that is singapore. Take that away and they cry murder. Your first night here was hilarious as somone in the audience actually tried to rebutt you by claiming that rapture beliefs are the majority. I salute you when you corrected him correctly by telling him he's the minority. He must've walked away shakened that night. I walk out that night feeling courageous and light because you have shown, one does not need uncommon courage to stand up to narrow-minded dispensationalist. By facts and history you have debunked the one of the sacred cow of christian beliefs in singapore. I am not sure if the masses are convinced. I am sure they think you are one nut case. (Overheard all over after the first night!)
I think they will faint if they see in your blog that you read marvels. In singapore, christians must study their handbooks and stick to chrisitian literature. Comics are for reprobate, apostate and liberals. At least thats what I have been called. My favourite mavel graphic novel is X-Men, "God Loves, Man Kills".

Dr.Ben thanks for bringing the sunshine.