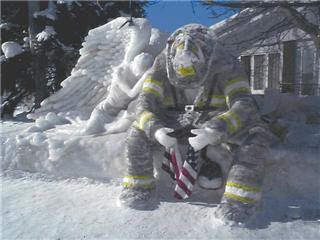 My grandfather was a fireman, indeed he was the fire chief in Wilmington N.C. Here is a wonderful oxymoronic ice sculpture of a fire man. What makes this one especially poignant is that this is an image from 9-11 from a fireman involved in quenching the blaze at the World Trade Center and rescuing those that he could. Utterly exhausted, you see him here sitting down, holding the flag, and being held up by an angel.

This reminds me of an episode from my childhood that involved my grandfather and me. It was a hot humid summer night and the fire bell went off in his house in Wilmington in the wee hours of the morning. My grandfather jumped into his fire clothes and rushed down the stairs. The bell was so loud, and was next to my bedroom, and I had to be peeled off the ceiling when that thing rang. It would have awakened the dead. Grandfather jumped in the red cruiser with the light on top and head off to an apartment fire. I couldn't sleep after that. This was B.C. (before air conditioning) and I was sticking to the sheets anyway.

Hours later he returned exhausted and smelling of smoke. I asked him what happened. He had gone into the blazing inferno and rescued a child upstairs, but not without having the floor collapse under him and him miraculously walk out the front door unharmed. I imagine that same angel was leaning on Pop that night.
Posted by Ben Witherington at 5:10 PM

My grandfather was a fire chief in Pensacola, FL for a while, back when I was just a small child. I imagine God was with him on many occasions as well. Thanks for sharing that story. :)

Ben,
Thanks for sharing your story with us. Your grandfather is a real hero. I do believe in angels who take care of those of who need help in life along the way and as well us entertain angels. If you would like to you can check out my current post on entertaining angels. Again thanks for sharing this story with us all.
Leslie your grandfather was also a hero. I thank God for all the hero's in life that we never mention or give recontion.